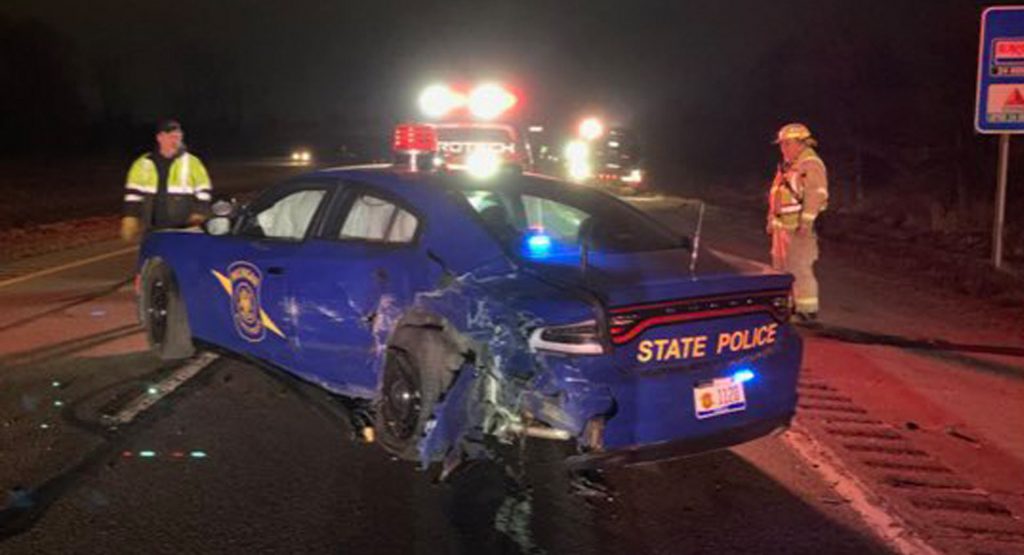 Hitting a car on the motorway is one thing, hitting a police car is another thing. A Tesla model Y driver has just recently slammed his electric car into a Michigan State Police Patrol.

From the information released by the authorities, the troopers from the Lansing post responded to an event that happened shortly after 1am where a vehicle collided with a deer on the road. While inspecting the scene of the crash, a Tesla Model Y came out of nowhere and crashed into their Dodge Charger, which at the time was slightly blocking the right with emergency lights on.

From the images shared online, the two vehicles were severely damaged from the crash. The police’s Dodge Charger lost its rear driver’s side door, rear fender and rear bumper to the hit. The Tesla Model Y took a fair beating as well as it got a gash on the entire passenger side.

From what we learnt, there was no casualty in this crash. However, the 22 year-old driver behind the wheel of this EV might have found himself in deep trouble as he was driving with a suspended license. The first offense would get him a fine of $400 and 2 points on his driving record. The bad news is that he was under a driving suspension, which means he will pay $500 in fine and a maximum of 3 months in jail for a first offense.

The authorities are not absolutely sure what led to this crash, but it was discovered during investigation that the Autopilot was active at the time of the incident. Regardless, this is no excuse for any driver to take their eyes off the road. The police will also be running more enquiry if truly the Autopilot was engaged before the crash.

It seems people might not really understand how this Tesla’s Autopilot works. According to the manufacturer, it requires active driver supervision, as it is not a fully autonomous technology.

In recent times, several related cases have been reported, where drivers allowed the Autopilot to do everything for them on the road, without paying any attention. This has led to many road fatalities. Robert Sumwalt, who happens to be the National Transportation Safety Board Chairman, said: