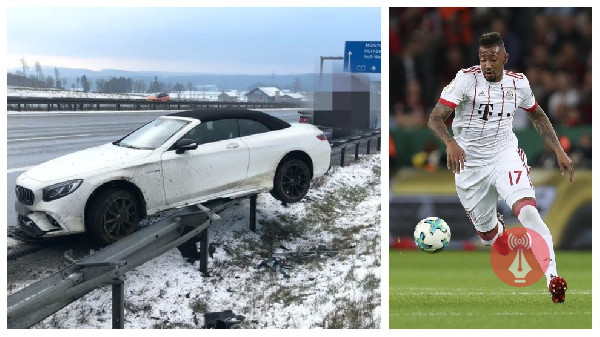 Since the outbreak of the coronavirus, many countries have been on total lockdown to avoid the spread of the virus within their walls. Despite the restriction placed on movement, many people have been caught defiling this order. One of such cases was when Bayern senior football club player Jerome Boateng reportedly crashed his luxury Mercedes-Benz car on the motorway while returning from a trip to his ill son.

From what we learnt, the damage was estimated to be around $27,000 ( ₦ 10m) and we doubt if any insurance would cover such. The Bayern defender was coming back Leipzig when his Cabriolet S63 skidded from the icy road straight into the motorway barrier. The Mercedes Benz crashed was on summer tires instead of the winner tyres that could have prevented such mishap.

It was a double tragedy for the center back as he was fined by the club while paying for the cost of damage from his pocket. The club had to fine him for subjecting himself to risk and going out of the club without any form of approval.

The fine, which will be paid by Jerome, will be given out to local hospitals. The player himself has come out to talk about the whole incident, where he revealed the importance of his son’s heath and his willingness to pay the fine levied on him.

“I accept every fine in the world if it is justified. And I know that it was certainly a mistake not to let the club know about my trip, but at that moment I was just thinking of my son.”

“His health was not good. When a son calls his father, then of course I’ll still go, no matter what time.

I accept every fine for him, after all, that’s my son”

“I want to see the father which doesn’t leave in such a moment to be with his four-year old son. I think it’s sad.”

You may also be interested in seeing what other expensive cars the Bayern center back owns in his garage. Check out the video below: