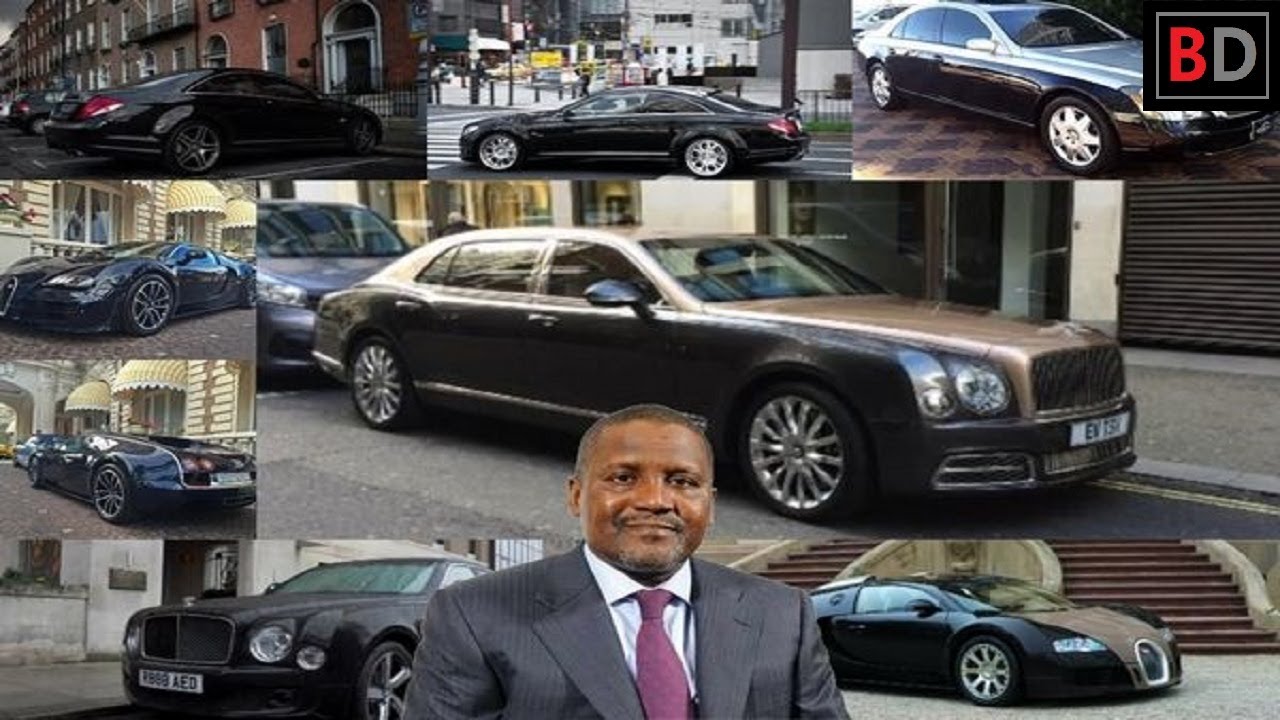 Here on Cars9ja.com.ng, we do not expect less from the richest black man alive, especially when it comes to the luxury models you will find in Aliko Dangote car collection. Just like you, we have been curious for some time now on what the billionaire has parked in his garage. Do not go too far, here is your answer!

Aliko Dangote is not one of those wealthy people that enjoy flaunting their money or material acquisitions. He is a simple family man and a philanthropist as well. In spite of all these, he is too rich to go unnoticed. He owns some of the most expensive rides on the planet. We have done our research and we can tell you that he drives some of these cars himself. From Bentley to Mercedes to Bugatti, Aliko Dangote car collection drips of luxury, speed and performance.

Aliko Dangote car collection that will amaze you

Surprisingly popular Nigerian blogger Linda Ikeji owns this same model. It is an ultra-large luxury car from Bentley. Although it was discontinued this year by the luxury marque, yet it takes nothing away from its style and comfort. Bentley Mulsanne got its name from Le Mans iconic brand, with a unique 4-mode air suspension for smooth sensation on the road.

Aliko Dangote’s Bentley Mulsanne comes fitted with a specially designed turbocharged 6.8-liter engine, which can be switched from its powerful V8 cylinders to that of V4, especially when it requires less power. If you are interested in sharing same model with Aliko Dangote, be prepared to cough out as much as $310,000 (₦112 million).

This beautiful model – Maybach 57S now offers a refined look and upgraded features. This particular model has since undergone a thorough tuning by American Studio Knight Luxury. Carbon, a lightweight material, was used for its doors, boot lid and fiber hood.

For its inside view, it offers an interior designed with rare carbon fiber. More attention is paid to the rear seats, where the occupants will be duly entertained by the Apple set. There is availability of leather truck (trimmed) for luggage. The Knight Luxury comes fitted with twin-turbo 12-cylinder engine with an output of 712 horsepower. This exotic model is one of the jaw dropping road machines you will find in the African richest Aliko Dangote car collection.

The Mercedes-Benz CL65 AMG is one of the sleek models you will find in Aliko Dangote’s fine collection. The intimidating Mercedes model offers a V12 AMG turbocharged engine with an output of 612 horsepower and a top speed of 290 km/hr. from what we learnt, this particular model can race most cars on the planet. It’s all yours for $220,000. For now, it stands proud in Dangote’s expensive garage.

Who says Dangote doesn’t like insanely fast cars? Well, to clear your doubt, you need to see this Bugatti Veyron. Hardly will you find faster cars around. It offers a peak speed of 431 km/hr. the most exciting thing about this model is; it is road legal. Dangote can decide to take out into any of the roads in Nigeria.

Aliko Dangote car colection boasts of Bugatti Veyron, built with some of the finest materials around. It can accelerate from a standstill zero to 100 km/hr. in an impressive 2.5 secs. The speedster from the German automaker goes for a whopping $2 million.

Being the richest man in Africa comes with certain luxury. Owning a private jet is definitely not an exception to this business mogul. From report, Aliko Dangote procured a private jet dubbed Bombardier Global Express XRS from the Montreal Canada. The delivery of this $45 million (₦17.38 billion) private jet was made through the Lagos International Airport during his 53rd birthday celebration.

Aliko Dangote’s privately owned jet can offer enough space for 8 people, while getting well entertained. This Bombardier Global Express jet can fly non-stop to China from Nigeria. No doubt, it suits big personality like Aliko Dangote without jeopardizing his safety on the air.

From a new gist in town, we learnt the billionaire has already ordered for another private aircraft from same manufacturer. We are yet to get hands on the information as it hasn’t been publicly unveiled yet.

Billionaire Aliko Dangote sure knows how to enjoy life to the fullest. After all, he has enough money to afford such luxury on water. He owns a super expensive yacht at a staggering price of $43 million (₦13.2 billion).

If you do not mind, we would love to take you on a tour into this breathtaking yacht, owned by the richest man in Africa:

Strangely, Aliko Dangote doesn’t have any house outside Nigeria. He recently made this shocking revelation that all his houses are within the four wall of his fatherland. Take a look at the beautiful pictures of the billionaire $30 million masterpiece in the Federal Capital Territory.

Aliko Dangote Biography and Net worth

Born on the 10th of April 1957, Billionaire Aliko Dangote was born into a rich Muslim family. His great grandfather, Alhaji Alhassan Dantata, who happened to be the richest man in Nigeria and West Africa as a whole until his death in 1995.

Dangote started business at tender age, right from his primary school days, where he was making profits from his sales of candy to his school mates. He however had his tertiary education from the Al-Azhar University in Cairo, Egypt.

>>> You might be interested in this as well: See the ₦386.5M luxury machines in the 6-month champion Andy Ruiz car collection

In 1977, Aliko Dangote ventured fully into business where he set up his first firm. With dedication and hard work, Aliko Dangote transformed his small business into empire that we all know today. His business world spans across areas such as sugar, cement, drinks, real estate, banking and lots more.

Aliko Dangote usurped Saudi-Ethiopian billionaire, to emerge as the richest man in Africa in 2013. His net worth is estimated at $8.9 billion (₦3.226 trillion).

He had his first marriage at the young age of 20. According to what we learnt, this marriage was set up by his parents. Aliko later divorced his first wife, whose identity hasn’t been revealed to the public.

Aliko Dangote eventually married Maria Ad Muhammad Rufai, a marriage that didn’t last for a long time. Aliko was rumored to have fallen in love with the daughter of his friend, Umaru Musa Yar’auda. However, the girl blatantly rejected his proposal.

Despite series of romantic affairs, some true while some are just rumours, Aliko Dangote fathers 3 daughters – Halima, Fatima and Mariya. He also adopted a son – Abdulrahman Fasasi. His three daughters reportedly graduated from top universities in the United Kingdom.

Aliko Dangote is indeed what most of us call the ‘Black Excellence’. A journey that looked like yesterday has brought pride to Nigeria and Africa as a whole. Aliko Dangote sure deserves time to himself to relax after long hours of hard work. Aliko Dangote car collection isn’t just expensive but a clear representation of fruitful labour.