David Beckham net worth, cars and houses in 2020 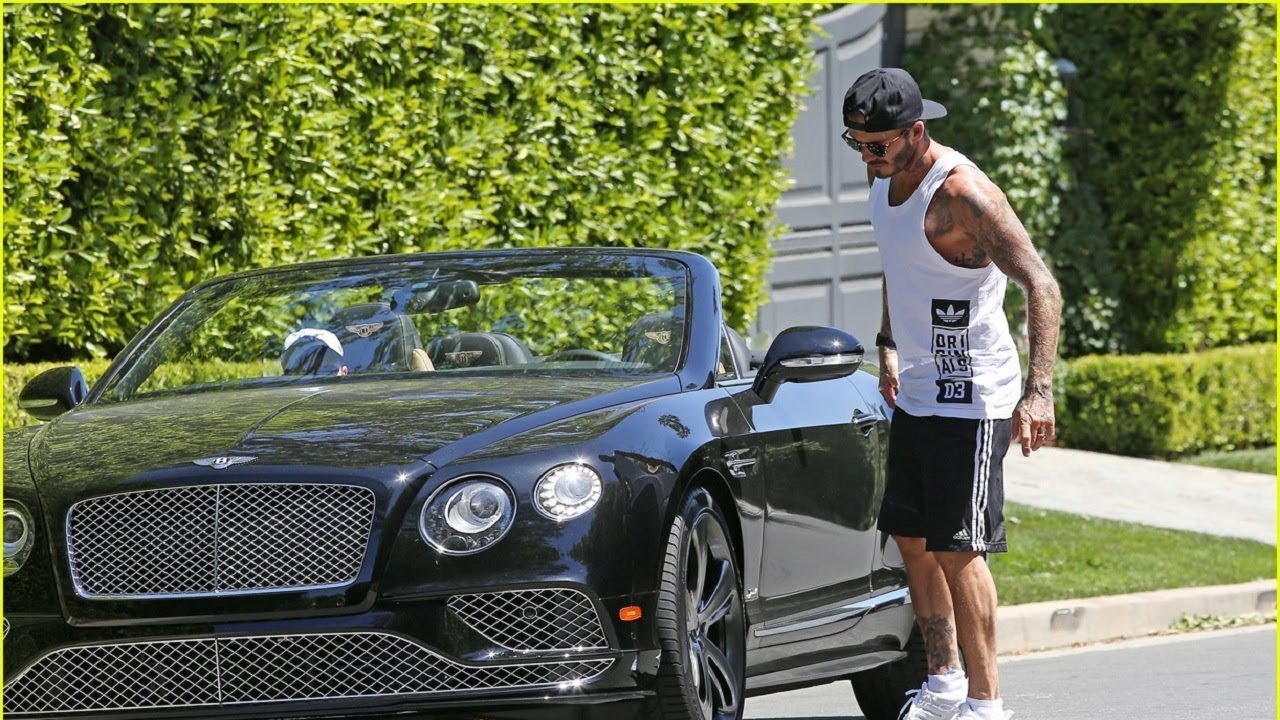 1. Who is David Beckham?

David Robert Joseph Beckham is an ex-British footballer who played professionally for Manchester United, Real Madrid, Preston North End, Paris Saint-Germain, LA Galaxy and England national team. He is the co-owner and President of Miami CF. The co-owner of Salford city currently holds the position as the only English football player to win domestic league titles in England, France, Spain and the US. After 20 years of active football with 19 major trophies, the iconic David Beckham retired from the sport in 2013. As a right winger, He was best known for his insane bending freekicks talent and ability to deliver pin-point crosses.

Beckham started his professional club career playing for the Red Devils (Manchester United) when he was just 17 years old. He went on to win 6 Premier League titles, 2 F.A cups, 1 UEFA Champions Leagues. The English man also won titles in Spain when he was a Real Madrid player, where he won La Liga domestic league title. David Beckham was the first English player to appear in 100 UEFA Champions League games. At the tail end of his football career, he signed a 5 year deal with L.A Galaxy, a clubside in the US Major League Soccer.

At the international level, David Beckham made his first appearance for the English senior national team in 1996 when he was just 21 years of age. He had 115 appearances for the Three Lions and also captained the team for 6 years. The British-born retired footballer featured in 3 FIFA World Cup competitions and 2 UEFA European Competition. The set-piece specialist was a two-time runner-up for the FIFA World Player of the Year and 1 time Ballon d’Or runner-up. In 2008, He was inducted into English Football Hall of Fame, in recognition of his massive contribution to the growth of English football.

David is not all about good looks, he was a very talented footballer as well. He was once named by the great Pele as one of the greatest living footballer on the planet in 2004. He was the highest paid footballer player on the planet in 2013, pocketing as much as $50 million that year. David Beckham net worth is currently estimated at $450 million. He has earned a whopping $730 million over his 20 years of illustrious football career. He also had his fair share of massive endorsement deals and the revenue generated from his major stakes in the two clubs – Miami FC and Salford City.

The 45 year-old David Beckham was born on the 2nd of May 1975. Unknown to many, he came from a humble background. His Father David Edward Alan was a kitchen fitter while his mother Sandra Georgina was a hairdresser. He was born in London at the Whipps Cross University Hospital, Leytonstone. Beckham has 2 sisters – Lynne Georgina and Joanne Louise.

The love story of the iconic love duo – David Beckham and member of the famous Spice Girls Victoria Adams (Now Victoria Beckham) started in 1997. At a time, the couple was known as Posh and Becks, for the amount of media attention their relationship had. Beckham got married to Victoria in July, in an exclusive wedding ceremony. The couple has four children – Brooklyn Joseph (age 21), Romeo James (age 17), Cruz David (age 15), and the only girl Herper Seven (age 9).

David Beckham reportedly had over 50 tattoos on different parts of his body. He even tattooed the names of his wife and children on designated spots.

When it comes to collecting expensive cars, only few celebrities can go up against the iconic English retired football player. From what we learnt, Beckham has over 21 cars in his garage. Check out some of the luxury cars in David Beckham’s car collection:

The 2-door Phantom Drophead Coupe by the BMW-owned British company is one of the most impressive luxury cars out there. For someone like David Beckham, such a model is a must-have for him. He has the black version with some modifications to boost its appearance and performance. The English man has added black rims of 24 inches to his version for a sportier look. David Beckham’s Rolls Royce Phantom Drophead is powered by a V12 6.75-liter engine with an output of 400 horsepower and 500 pound feet of torque.

This Mulsanne was introduced by the British luxury marque back in 2010. Beckham couldn’t wait for a year before he got his own. Beckham has been spotted many times coming out from the rear seat of this beautiful and spacious luxury model. His Bentley Mulsanne was fitted with a V8 6.75-liter engine, all mated to 8-speed automatic transmission. Being a British man to the core, Beckham is a big fan of British-owned luxury models and he decided to go for the black-coloured Mulsanne. Although, the Mulsanne flagship has been discontinued but remains one of the most luxurious models from the luxury brand.

This is another British luxury model in David Beckham’s car collection. It’s a rare model to see even in most expensive neighborhoods. David got this high-end variant of this model in 2013. The McLaren MP4-12C Spider was powered by a V8 3.8-liter engine with an output up to 616 horsepower. Once again, Beckham did go for the black version. Does this make Beckham’s favourite colour black? Probably, he loves the way these cars look in that colour.

The retired footballer star’s collection is an exhibition of insanely powerful and expensive cars. The high-powered exotic sedan Audi S8 is one of those beasts we were talking of. It came fitted with twin-turbocharged V8 4.0-liter engine with a generative output of 520 horsepower. As usual, the Miami FC co-owner decided to replace the original chrome trim with black paint, making it all-black luxury sedan.

The Bentley Bentayga is one SUV most celebrities are super crazy about. Since Beckham is a proper English man, we couldn’t expect less. He has many Bentley models and the Bentayga is another of such models you will find in his garage. The Bentley holds the street cred as the most powerful, most exclusive and fastest SUV on the planet. His Bentley Bentayga came fitted by a turbocharged V12 6.0-liter engine, coughing out as much as 600 horsepower. The luxury SUV is spacious, making it ideal for Beckham’s family to have an ultimate road experience.

David Beckham isn’t all about recent luxury cars. He collects classic cars as well. This V8 Vantage by Aston Martin, another British luxury carmaker, is a testament to such. Thankfully, we are seeing different colour aside the usual exquisite taste for black cars. This vintage convertible model is red-coloured (deep).  Surprisingly, it can run quite well from its V8 5.4-liter engine delivering up to 403 horsepower. We guess this car is held dearly by the English man family as it is a rare model.

Since Beckham was once an ambassador to the brand, it is normal for him to ride in one of their best luxury cars out there. He reportedly got this model on Christmas as a gift to himself. Only 250 units have been made till date. The Jaguar F-Type Project 7 model was powered by a V8 5.0-liter engine with an output of 575 horsepower and a peak speed of 186 mph. there is a possibility that he got this 2-seater sportscar free for image boosting.  We sure expect him to cruise this car only with victoria since it isn’t that spacious on the inside for additional 4 children.

The Continental GT Supersports is one of the most sought-after models from the British automaker. This is unarguably the first of Beckham’s numerous Bentleys to take an exception to the black exterior paintjob. It came painted in Beige colour; a colour handpicked by Victoria Beckham as a way of differentiating it from her black-coloured Continental GTC. We didn’t expect less from its road performance since it offered a W12 twin-turbocharged engine with an output of 621 horsepower and 590 pound feet of torque.

The intimidating black-coloured Rolls Royce Ghost is another stunning model in David Beckham’s car collection. This model shares man similarities with his Drophead Coupe. It is powered by a V12 6.6-liter engine, producing an output of 560 horsepower and 575 pound feet of torque. It was also fitted with some aftermarket products such as custom-made massive black rims to blend well with the exterior paint.

In 2013, David Beckham welcomed this new black-coloured hot wheel into his garage. Although, isn’t as powerful as other cars in his collection but its performance is pretty decent to someone of much auto pedigree like Beckham. It came powered by a V6 3.0-liter supercharged engine with an output of 430 horsepower.

We almost thought David Beckham wouldn’t have Italian taste until we caught glimpse of this masterpiece at his Malibu vacation home. His Ferrari 612 Scaglietti featured a V12 5.7-liter engine with a top speed of 199 mph and generative output of 533 horsepower. Beckham reportedly got this fast road beast when Harper Seven was born. What a way to celebrate the birth of the only daughter in his household.

This is another luxury model from the Italian automaker in his collection. The remarkable performance level of this supercar caught many eyes and one of those admirers was David Beckham. He was so in love with this particular model that he acquired more than one despite its rarity. The Ferrari 360 Spider offered a V8 3.6-liter powertrain with an output of 395 horsepower and 276 pound feet of torque.

This is another model Beckham took his wife’s design suggestion on. He acquired this luxury SUV in 2013, with a surprising matte-gray colour scheme.  This special edition model is quite exclusive and just 200 examples made it to the streets. Luckily, David and his family member got one.

Avid Beckham has a reputation for acquiring expensive and insanely fast cars, especially ones with exterior black paint. This particular model Porsche 911 Cabriolet shows us why the London-born businessman and retired athlete loves customizing his cars. Its interior has been upgraded same way it was done for the outside. We heard he put this model for up for sale on the auction in 2011 and was sold for $217,100.

This black Jeep Wrangler Unlimited is one of the highest performing SUVs you will find on the market with impressive off-road capabilities. Beckham reportedly loves driving this as he has spotted in it many times.

This magnificent house located at Holland Park in London was jointly acquired by the couple. In 2016, they spent a whopping £8 million to get the building renovated to their taste. The mansion is said to worth around £34 million. The luxury home comes in high taste with facilities such as wine cellar, gym, and separate quarters for their first son and lots more.

David Beckham is no doubt one of the best English players of all time to kick the ball. He has paid his dues with injuries, sweats and other difficult times during and after his 20 years of footballing career. He definitely deserves some of the best things in life. Beckham garage is filled with some of the most expensive cars on the planet and his luxury home is a paradise.

>>> Check back for more celebrities’ auto updates on Cars9ja