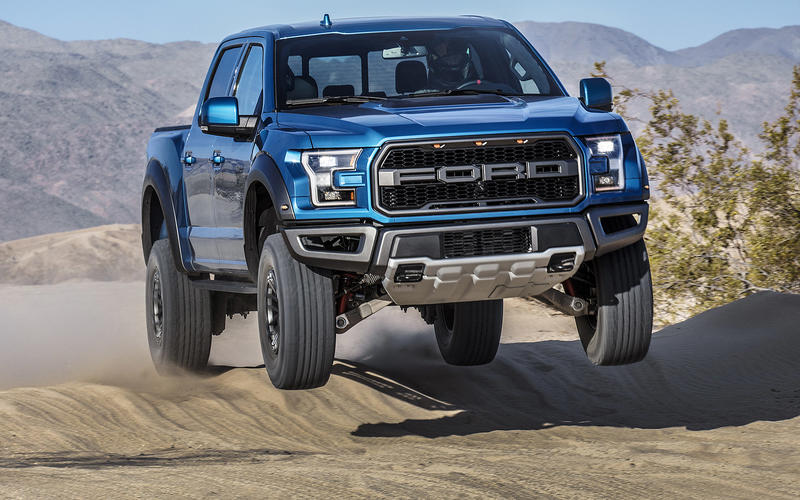 People rarely talk about the speed of trucks, since they are mostly for industrial use. Car enthusiasts are mostly concerned with the payload capabilities of trucks. This indicates the weight of load it can easily carry around. Unknown to many, there are some hauling trucks out there that are insanely fast, quicker than most cars you see on the road. All thanks to various brilliant engineers who came with the ideas of equipping some of these trucks with powerful engines, for such purpose. Here on Cars9ja are some of the world’s insanely fast trucks you might be lucky to see on the roads.

This vintage truck here might be least fast on our 10 countdown list, but it is not your ordinary truck. Chrysler built its speed machine – Dodge L’il Red Express as a result of ill attention given to muscle cars as at that time. The Dodge L’il Red Express between 1978 and 1979 was reportedly a stripped-down sporty pickup, with fitted garish gold accents, large side pipes, oak-accented step-side bed and many others. Its V8 engine was strong enough to take the car from zero to 60 mph in remarkably less than 14.7 secs. As at the time it was the hottest American truck in town, as it was competing favorably with supercars such as Ferrari 308, Porsche 911 and Porsche 928 in terms of acceleration.

In the mid-2000s, the American carmaker decided to get inspired by the iconic NASCAR cars when it was building this its Silverado SS. The Chevrolet Silverado SS succeeded the 454 SS. This model can sprint from zero to 60 mph in just 6.3 secs. Its potent engine can generate an output as much as 354 hp and 380 lb-ft of torque. This truck might not the fastest on our list, but can outrun several pickups out there.

Ford has the reputation for being the best-selling auto company in the United States. This Ford Tremor is one of the fastest Blue Oval trucks to be manufactured till date. The F-150 Tremor comes powered with a twin-turbocharged V6 3.5-liter engine with a generative output of 365 horsepower. The pickup truck can sprint from zero to 6o mph in just 5.8 secs. Surprisingly, the Ford Tremor is reported to be faster than the iconic Ford Raptor. This edge could be attributed to its lighter weight, which is 1000 pound less.

The Chevrolet Silverado has always been a defining moment in the production of pickup trucks. This particular model isn’t all about payload/towing capacity, but elegant interior and exterior design, as well as massive 420 horsepower from its V8 engine. The Chevrolet Silverado 1500 High Country for the 2015 model can sprint from 0-60 mph in just 5.7 secs.

Year 2015 really saw the production of some promising models. Chevys isn’t the only one to have made it quite hot out of the plant, but this F-150 3.5 EcoBoost. This model is said to be light weighted as much as 700 pounds less when compared with previous edition. Its turbocharged EcoBoost V6 3.5-liter can generate as much as 365 horsepower. It edges over the Chevy model in term of acceleration, which is zero to 60 mph in an impressive 5.6 secs.

There is something remarkable about the F-150 edition pickup. We can boldly say Ford put in a lot of work when producing these pickups. As at a time, this F-150 SVT Lightning was the world’s fastest pickup truck. We all know it can’t hold this record for a lifetime. At least, it enjoyed the crown for a while. The F-150 SVT Lightning can accelerate from zero to 60 mph in 5.2 secs.

This truck might look a bit simple and gentle to many, but this beast right here is an urban legend. The GMC Syclone was reported to challenge the likes of Lamborghini and Ferrari to a race when it was at its peak. From its potent engine, the GMC Syclone can sprint from zero to 60 mph in a remarkable slightly above 4.6 secs.

This was the truck that ran off with the SVT lighting number 1 position many years back. The engine was derived from the iconic Viper, coughing out as much as 500 horsepower from its V10 powertrain. The Ram SRTio was manufactured by Dodge and was able to make life very difficult for the Ford F-150 SVT Lightning on the road. It can accelerate from a standpoint of zero to 60 mph in just 4.9 secs.

The number 1 on our list of some of the quickest trucks to grace the road is the Toyota Tundra TRD Supercharged. In an incredible 4.4 secs, this truck can sprint easily from zero to 60 mph. this is a massive truck that can put fear fight into likes of supercars such as Aston Martin, McLaren and many others. It is powered by a V8 5.7-liter with an output of 504 horsepower.

There is always a misconception that trucks are bound to be slow or drag on the road. A look at these insane 10 pickups will not only set the record straight but convince you into getting one when buying your next car. They are fast and utilitarian as well.

See also  Jeez! Ferrari 458 hoons out of a car wash and crashes