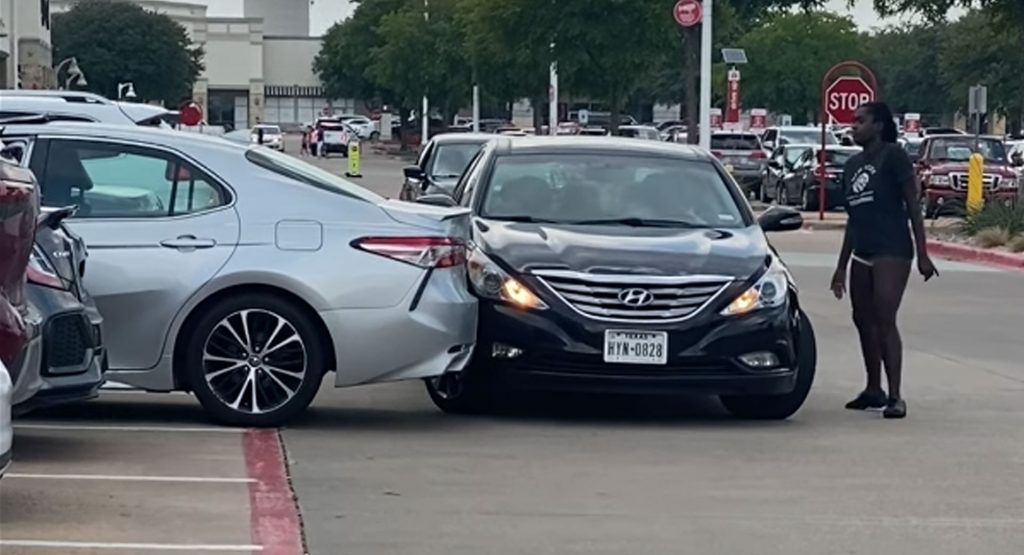 A crazy hit and run was recently caught on video in Frisco, Texas.

The incident occurred on July 24th in a Target parking lot, when a woman reportedly backed her car out and hit a Hyundai Sonata that was driving by.

While most drivers would simply apologize for the accident and exchange insurance information, that’s not what happened as the woman gets out of her car and starts yelling at the man she just hit. After demanding the man move his car, she hops back in her Toyota Camry, pulls forward and then slams into the Sonata as the man is getting out.

She does this again, so the man leans on her car in an attempt to get her to stop. The woman then gets out to yell at the man, before reversing into the Sonata once again. This time she doesn’t give up and successfully pushes the Sonata out of the way, while ripping off its front bumper.

As this is happening, the man is still behind the Camry and witnesses yell at him to get out of the way as the woman clearly doesn’t care if she runs him over. As witnesses frantically call police, the man is nearly knocked to the ground. However, his efforts were in vain as the woman is able to get free and flee the scene.

The video ends shortly thereafter, but the woman’s actions and license plate were clearly documented for all to see. It remains unclear if police have caught up to her, but she could be facing a number of charges including leaving the scene of an accident and reckless driving as it’s pretty clear she displayed a “willful or wanton disregard for the safety of persons or property.”