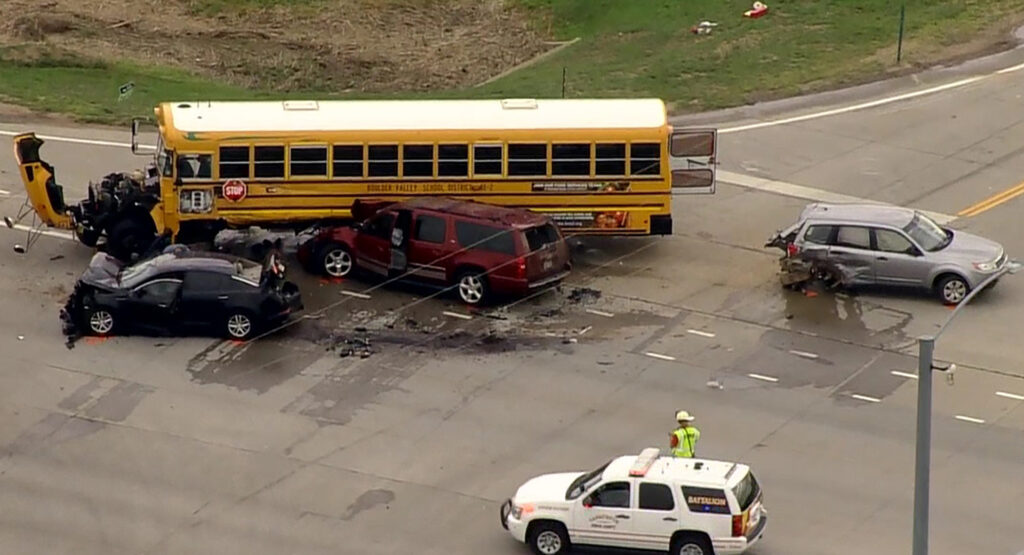 Whenever there’s a case of a child or underage teen taking their parents’ car out for a drive, the story rarely ends well. And that’s exactly what happened with this 13-year-old girl from Colorado who ended up causing a four-vehicle crash, one of which was a bus. According to the Boulder Daily Camera, the unnamed girl took her parents’ Chevy Suburban on a Friday morning, after which she decided to drive down the highway. It was at that point that she rear-ended a Kia Optima at a red light, which sent both cars forward into the intersection. The result was both the Optima and the Chevy striking a school bus, as well as the Suburban also colliding with a nearby Subaru Forester.

All four vehicles sustained some pretty serious damage, with the Suburban devoid of a front clip, the Optima with a crumpled front and rear end, the Forester with a smashed hatchback and a missing rear wheel, and the bus with a gouge in its side where the SUV hit. It remains unclear whether or not the girl took the Suburban without her parents’ permission (we guess without), but either way it’s a bad situation. Thankfully, despite the extensive damage done to all vehicles involved, nobody sustained any serious injuries. All three of the affected drivers were said to suffer only moderate injuries, and only the drivers of the Optima and Forester were transported to a hospital. The girl, meanwhile, escaped without any harm, and was charged with careless driving and driving without a license.