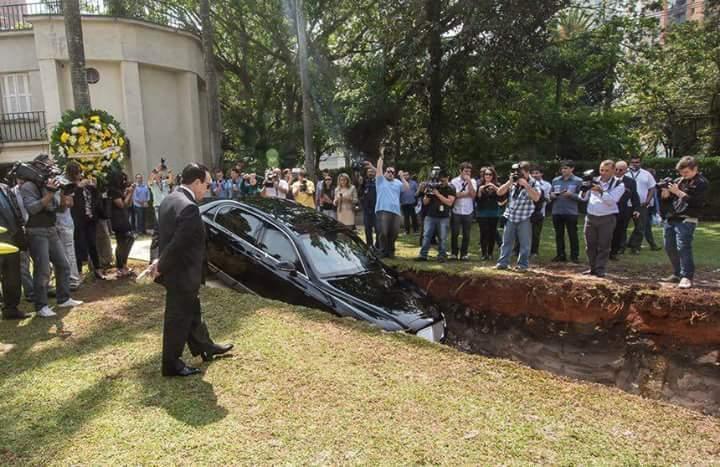 Count Francisco “Chiquinho” Scarpa, who happens to be a millionaire from Brazil, has attempted to do what only few people on this planet could imagine in a million years. In 2013, the rich Brazilian announced to the world his plan to follow the steps of Egyptian Pharaoh by burying his ₦140m Bentley car. What was his intention? He needed to cruise in afterlife in his luxury car.

He revealed that the massive grave will be dug inside the garden located at the back of his mansion in Jardins. He also made a promise that “cars funeral ceremony” will be done very soon.

Scarpa from the recent picture posted on Facebook alongside his Bentley Flying Spur, he captioned:

“I decided to do as the Pharaohs: this week I will bury my favourite car, the Bentley here in the home garden! Bury my treasure in my palace rssss !!!”

The Brazilian millionaire also posted another photo of him where he put his foot on a shovel beside his parked Bentley car, right in front of a deep hole, saying:

“For those who doubt me, yesterday I already started making the hole in the garden to bury my Bentley! By the end of the week I will bury it.”

These pictures went viral and drew lots of attention and criticisms from press and general public. Scarpa during an interview on TV gave an insight on what brought the idea, which to him was the way Pharaoh buried their most valued items in their life.

“I watched the film of the pharaohs and after seeing how they were buried with their treasures. I decided that I wanted to copy them and bury my most precious item, which is my car,”

Unmoved by several questions thrown at him while being interviewed, the millionaire made a shocking announcement of the date for burial, where he also asked the press to grace the occasion.

“I have not buried my car”. People condemn me because I wanted to bury a million dollar Bentley. In fact most people bury something a lot more valuable than my car,”

“They bury hearts, livers, lungs, eyes, kidneys. This is absurd. So many people waiting for a transplant and you will bury your healthy organs that will save so many lives.”

Surprisingly, it seems Scarpa has turned the tide around from a national antagonist to a Brazilian hero, where people are now showing him lots of love.

That was indeed an epic way to kick off national organ donation week in Brazil!