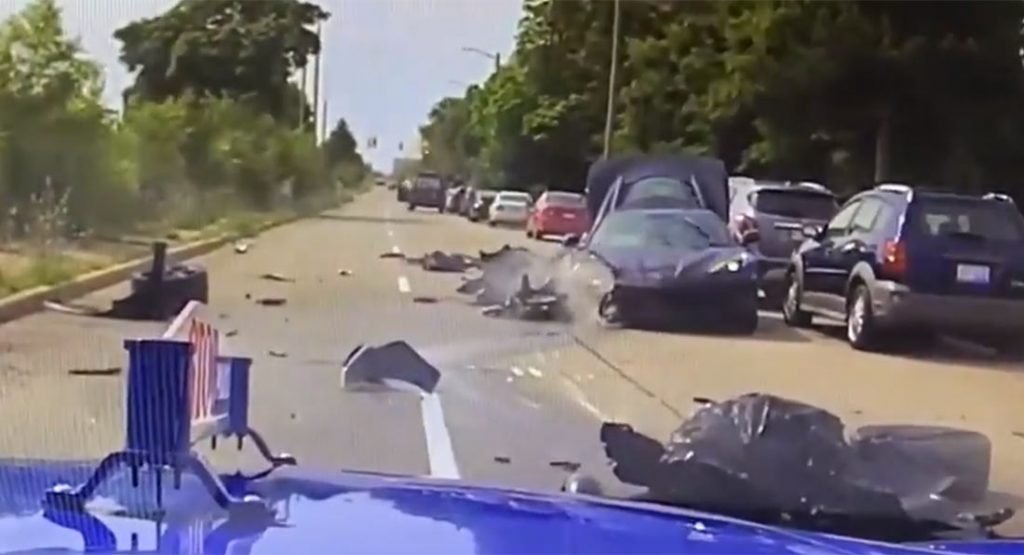 A C8 Chevrolet Corvette has been destroyed after crashing during a police pursuit in Detroit, Michigan.

The incident happened on Wednesday, July 15 after local authorities were alerted to the theft of a 2021 Corvette from a Novi dealership just after 10 a.m. Unbeknownst to the thieves, the car’s On-Star system allowed police to track the car.

Click on Detroit reports that authorities began to pursue the Corvette at about 10:30 a.m. after seeing it near the intersection of Gratiot Avenue and Outer Drive. Not long after, the thieves turned onto the I-75 Service Drive from Warren Avenue and sideswiped a van while crashing into multiple parked vehicles.

Dashcam footage from one of the police cruisers shows that a large section of the passenger side front end of the ‘Vette has been absolutely destroyed. Various parts, and fluids, from the sports car can also be seen strewn across the road.

Both the driver and passenger of the C8 immediately ran after the crash. Video from one of the police cruisers that responded to the scene shows the officer speeding after one of the men, driving through the grass of a nearby apartment complex. The thief, who was wearing a mask, quickly gave up, surrendering next to a playground.

Taking to Twitter, the Michigan State Police said the thieves had not yet been charged with any crime but we expect that, at some point, they will be. Unfortunately, the Corvette looks like a complete write-off.