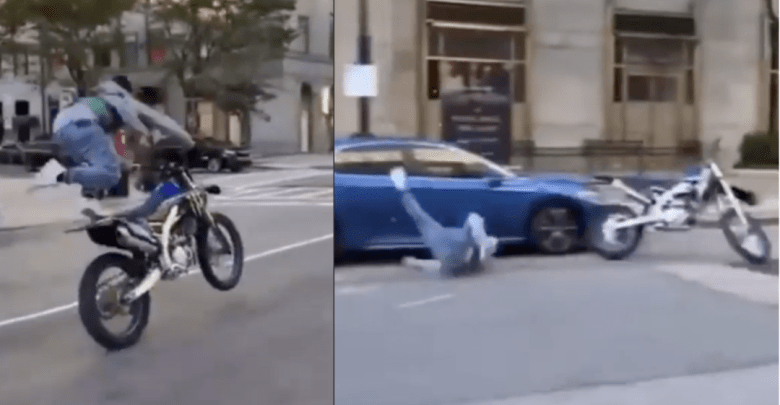 A dirt bike is, by definition, better suited off-road rather than city streets. If where you live allows for them to be street-legalized, then more power to you, just be safe. However, if you choose to start doing tricks in the middle of the road, you could end up like this man in Boston.

The video starts with the man doing a wheelie down the street with one foot on the seat and the other in the air, which is already off to a bad start. Predictably, that stance didn’t work out for him, as moments later he slips down the side of the bike. He manages to hang on to the handlebars with his legs dragging on the ground, but instead of slamming on the brakes, he seems to just ride it out, or at most brake lightly.

Just as it looks like he’s about to regain his footing, he slams into the back of a parked Toyota Camry and gets thrown off the bike. He then gets up, jogs over to his bike, gets back on, and rides off with the people filming. Surprisingly, it looks like the only damage the Camry sustained was a dent in the rear bumper’s corner and possibly some scratches down the side.

Regardless, it’s lucky there wasn’t more traffic, as things surely could’ve ended up much worse if, for instance, there was a car behind the man when he fell off his bike.