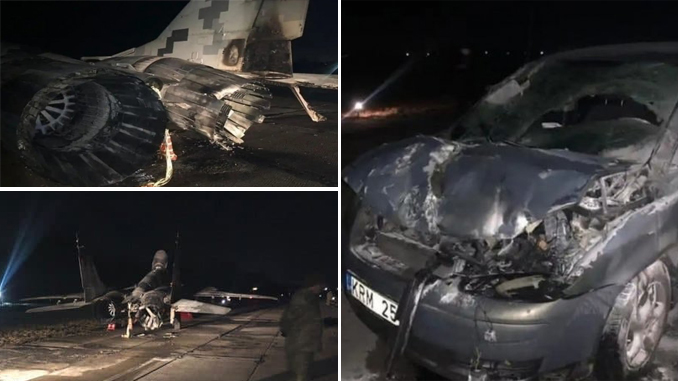 We understand that drunk drivers often drive recklessly, enough to cause mayhem on the road. In so many cases, drunk drivers had either jeopardized their lives or that of the other people using the road. But what makes this particular story strange is that the Ukrainian drunk driver crashed his car into a MiG-29 jet fighter.

According to report, the unfortunate incident took place in the Vasilkov, where an engineer driving under the influence of alcohol drove his Volkswagen Touran onto the airfield and rear ended a Jet fighter that was at the time being towed.

The jet fighter with a twin-turbo engine following the collision went up into flames. Though the information is a bit hazy but from the pictures shared online, we could see wrecked thirst nozzles and a scorched tail.

Of course we don’t expect the VW Touran to go unscathed after crashing into a jet fighter. The windshield of the vehicle was smashed while the hood and grille also suffered severe damage. Fortunately, no death or serious injury was recorded. The driver of the Volkswagen car only sustained minor injuries from the crash.

While we can’t say for now the full extent of the damage on the aircraft, the driver of this Touran will have a lot of time to explain to the authorities why he got drunk and crashed his car into a MiG-29 private jet. He is reportedly facing many charges as a result of the recent event.

If you must know, the new MiG-29 private jet goes between $11 to $20 million dollars in the current market.

To compound the bad news for the driver, there are only 29 of these MiG-29s in the fleet of the Ukrainian Air Force. Consequently, the man has just taken four percent, one some of the rarest jet fighters on the planet as well as one of the frontline fighters