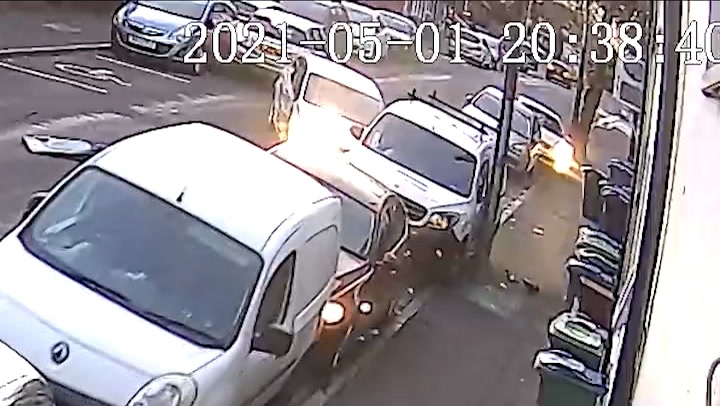 The shocking event was captured on CCTV, showing the moment a suspected drunk driver crashed into an oncoming car before hitting several parked cars on a residential street. From the clip shared online, the car is being driven on the uplands, Smethwick, before the white car swerves to the right, where it ends up striking another car.

Afterwards, the hatchback violently smashed into several vehicles just a few seconds after losing control last Saturday around 8.40pm. The footage also shows the moment where both the residents and motorists screamed from their homes and cars respectively to the shocking crash.

The police revealed that the case is of a suspected drunk driver striking parked vehicles. As a result, one 31 year-old was arrested on suspicion of driving under the influence of alcohol and attempting to flee the scene of the accident. The suspect has been in police custody since 2nd of May, 2021.

“We were called to reports that a suspected drunk driver had collided with parked cars in The Uplands, Smethwick, at around 8.40pm last night (May 1) before running off.

“Officers traced the driver nearby and arrested him on suspicion of driving while over the alcohol limit and failing to stop at the scene of an accident.

According to the police response team, the drink-drive arrest was the second in a single shift for Brierley Hill’s C Team.

“The aftermath of this one resulted in multiple vehicles being damaged. Offender left the scene, we made enquiries and located him nearby.

“He is now under arrest on suspicion of driving whilst unfit through drink.”