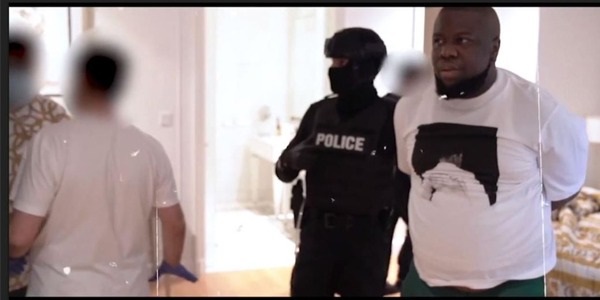 In a recent viral video released showing the arrest of the alleged international fraudster Raymond Hushpuppi and his accomplices. The Dubai police revealed in this shared video how the Instagram big boy known for flaunting his wealth was arrested in an operation tagged as “Fox Hunt 2”.

Part of the shared video was images of the confiscated 23 luxury cars which all belong to Hushpuppi and his accomplices.

From what we learnt, the police apprehended 12 international cybercriminals, busted an organized fraud of 1.6 billion dirhams. The main scam technique of Raymond Abbas known as Hushpuppi was through creation of fake websites to receive these illegal funds. Hushpuppi and other people involved in this fraudulent act made use of messages and emails to lure people to make payments into these sites, ridding many of them of their life savings or hard earned money.

Hushpuppi and his gang allegedly hacked into corporate emails and transferred large payments into controlled accounts. Another Instagram acclaimed big boy and suspected internet fraudster Olalekan Jacob Olalekan popularly known as Woodberry, was also apprehended alongside other 10 men during a 6-man operation carried out by the heavily-armed SWAT team.

The confiscated luxury cars were valued at 25 million dirhams ($6.8 million). Other valuable items such as 47 smartphones and 21 computers were seized as well. From the 119,580 files recovered from these alleged scammers, up to 1.92 million people have been victims of this massive fraud.

Hushpuppi with over 2 million Instagram followers is known to regard himself as businessman and real estate investor.

What do you think?

>>> Come back for more eye opening and interesting piece like this.