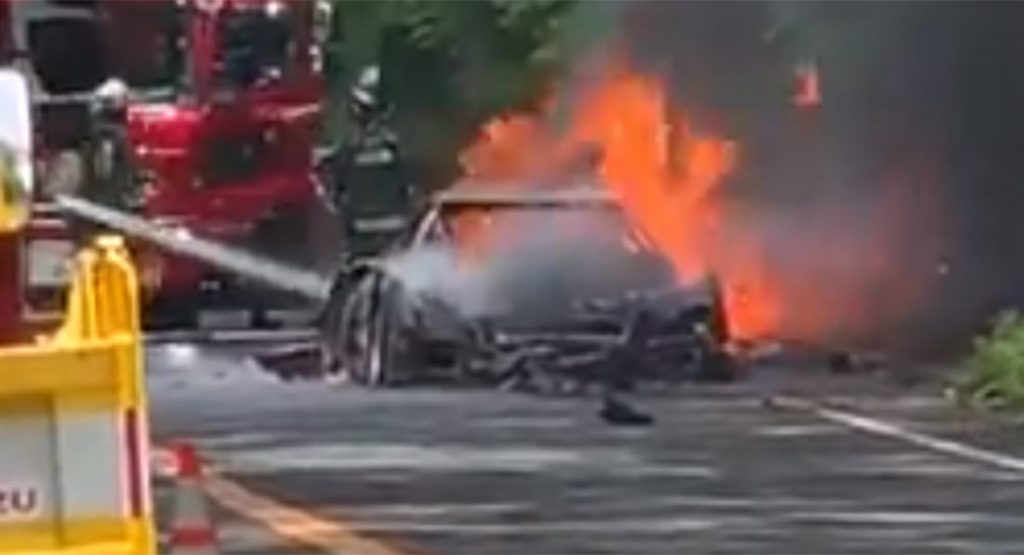 From a fresh report, a very rare Ferrari F40 mid-engined car was recently destroyed by fire in Japan. The Italian model was driven last Saturday along the famous Hakone Turnpike, when the couple inside the car saw smoke seeping from the engine bay. As a result, it wasn’t long after they pulled over that the Ferrari F40 went up into flames.

From the clip shared online, the fire service could do nothing upon arrival at the scene of the fire accident. The crews couldn’t put out the fire as the F40 was destroyed beyond recognition. The only thing left of the car was just a melted mess of carbon fiber and steel.

The Italian carmaker only manufactured 1,315 units of this F40 model. Unfortunately, the number has been reduced by one now prior to the latest fire incident. The good thing we can take from this sour story is that no one was injured in this inferno.

The F40 was originally introduced in 1987 as the rightful successor to 288 GTO. it was equipped with a V8 twin-turbo 2.9-liter engine churning out an output of 471 horsepower and 426 pound feet of torque. The engine was mated to a 5-speed stick shift transmission. Eventually, the F50 came to replace the F40, later to be succeeded by the likes of Enzo and hybrid LaFerrari. A lot of people still considered the F40 as the greatest Ferrari model produced till date.

So far, no one knows what actually triggered the fire, but the best we can hope for the owner is that the insurance will cover the full cost of this expensive and iconic Ferrari mid-engine sportscar.

While it’s impossible to say what exactly triggered the fire, all we can hope for is that the car’s insurer will fully cover the cost of the prized mid-engined icon later replaced by the F50 which itself made way for the Enzo and then the hybrid LaFerrari, many still consider the F40 to be the greatest Ferrari ever created.