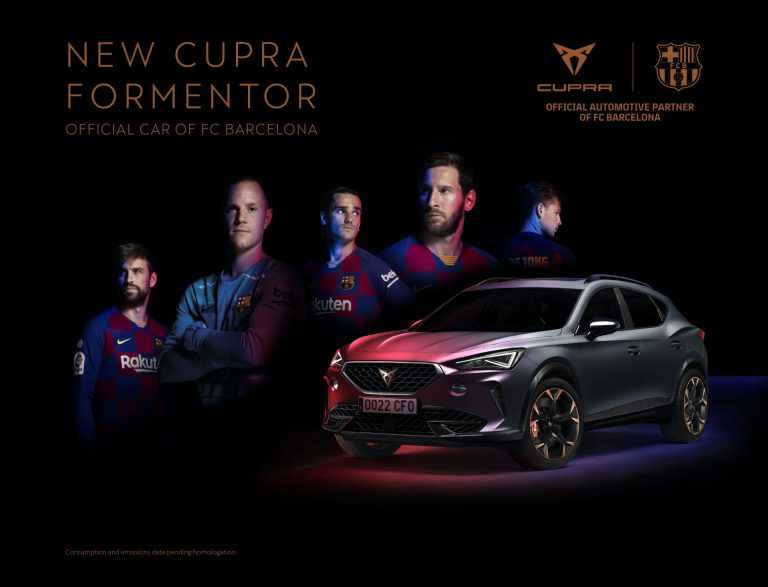 Until recently, no car manufacturer has announced itself or model as FC Barcelona’s official car brand. Well, things have taken a dramatic turn as Cupra Formentor SUV coupe is now the club’s official brand. We believe this is good news for Barcelona fans around the globe.

Unknown to some, this brand is under the umbrella of SEAT and it emerged as Barcelona’s automotive partner in 2019. Since the Cupra Formentor SUV has been named the mobility partner of the club, we might start seeing the likes of Lionel Messi, Luis Suarez and others in this model to trainings. But, we couldn’t but wonder what will become of their regular Supercars if this rule is mandated?

On the contrary, this new SUV will be given to the club for only institutional usage. This means that as part of the new partnership, the players will be allowed to customize their own to taste. From what we learnt, Andre ter Stegen, who happens to be the club’s first choice goalie and Cupra global ambassador, has openly expressed his interest in the Formentor SUV.

The brand is making use of the marketing strategy to bolster its global sales and create more awareness for the new vehicle, judging by the reputation of the club. No doubt, such a massive collaboration with a club as big as Barcelona FC has lots of benefits. The pre-booking of the new flagship model will commence by 8 July this year. According to report reaching us, Cupra already has interests from people as much as 20,000 on this new model. Hopefully, these interests will be turned into real orders and more of such to come.

If you are interested in pre-booking your order for this Formentor coupe, the company has already set up a platform online where you can do that, especially for the exclusive launch edition. By doing so, you might be part of the first people to experience the SUV first hand on the road.

According to Wayne Griffiths, the CEO of Cupra, said:

“Naming the Cupra Formentor as FC Barcelona’s official car is a natural move. This model has been designed, developed and will be produced in Barcelona, the city where these two brands were born and from where we want to inspire the world.”

On July 8, the automotive brand and Barcelona FC are expected to launch its official spot, which will feature the first team players of the club. This collaboration will surely make Cupra brand quite desirable among football lovers and car enthusiasts.