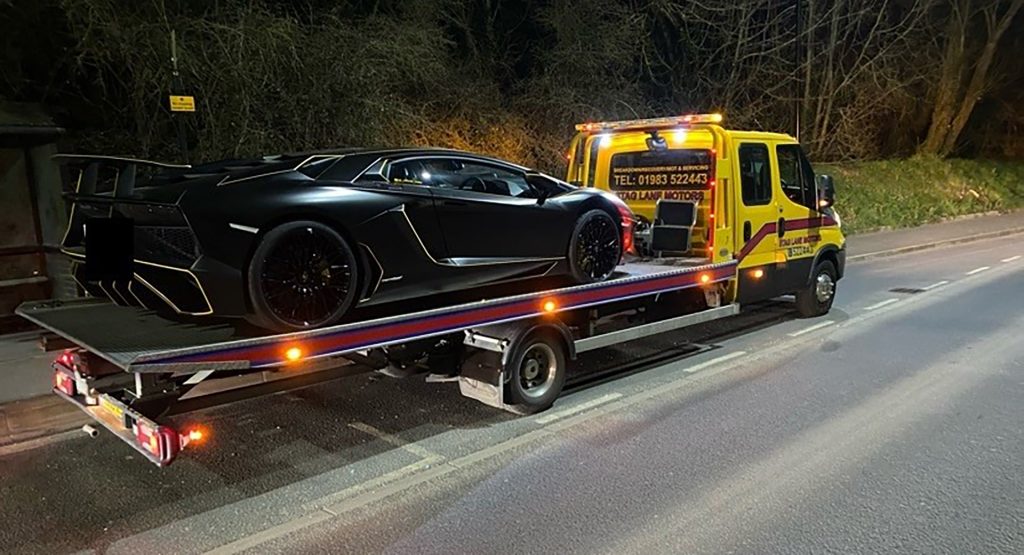 Getting your Italian supercar towed away for defaulting on insignificant tax payment is baffling and sounds impossible but it’s far from a fairytale. A Lamborghini Aventador was flagged down during a routine traffic stop by the officers of the Wight police department recently. Surprisingly, the driver behind the wheel did not make a fuss about this stop as he parked his car by the side of the road.

We could call this a hunch considering the Lamborghini didn’t commit any traffic rule enough to be on the police radar or red flag. The police on the Isle of Wight, an island off the south coast of England wouldn’t let this insanely fast supercar worth over $300k slide as they pulled it over from their unmarked BMW X5.

Upon discovery, the owner of the $300k+ Lamborghini Aventador was found guilty of not paying road tax since last year. The police had no choice but to seize and load this supercar onto the back of the flatbed.

In England, the law requires that you pay more road tax as an owner of an exotic car, considering the high level of emissions produced by these cars. Such applies to owning an Aventador SVR and other expensive models, where it is expected of you to pay an initial tax fee of £2,175, but subsequent payment of £150 to the government.

If you are an owner of a supercar that costs as much as 6 figures, it will be required of you to add an extra £325 to the subsequent payment. Well, we do not expect this fee to stir any issue with the owners, which is relatively small compared to the amount they paid for the supercar in the first place.

Check out some of the exotic cars seized over tax evasion

This recent information was posted on the Facebook account of the Wright police department. Expectedly, this didn’t go down well with some of the readers, who stood with the owner.

At least they all agreed on one thing; they all feel the owner shouldn’t be found wanting for such payment. Hopefully, his Aventador will be returned to him soon but he should have learnt his lesson not to play smart with the government after paying the impound recovery fee and tax debt.