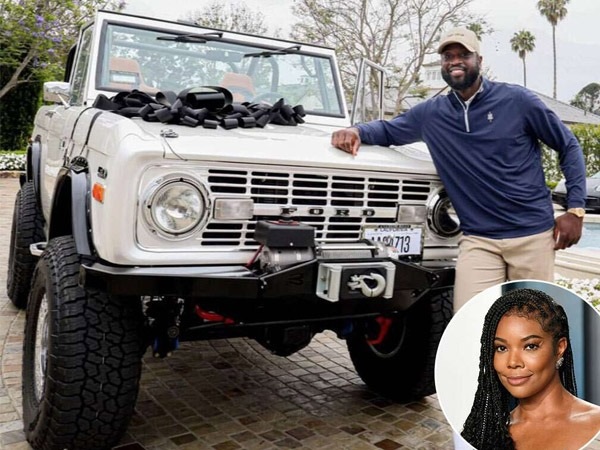 Father’s Day couldn’t have gone any better for the Wades family when the former NBA star Dwayne Wade got a beautiful gift from his celebrity wife Gabrielle Union. According to report, the gift was a new Ford Bronco Roadster, which was presented to the Miami Heat legend on the just-celebrated Father’s day.

The video was shared by the couple on Instagram, where Gabrielle union presented the powerful off-road beast to her retired NBA husband.

“Don’t ever say I didn’t do nothing for you, i love you.”

The super-excited Dwayne Wade however decided to share his joy with fans, by captioning the video with:

Happy Fathers Day to Meeeeee!!!! I mentioned years ago that when I moved to LA I would love a BroncoWell, the wife was listening. Thank you @gabunion you did that!!!!

The retired NBA player Dwayne Wade spent most part of his sixteen years of playing career with the Miami Heat, where he retired in 2019. He later married Gabrielle Union, a 47 year-old Hollywood star in 2014.

The American automaker Ford produced and marketed the Bronco from 1965 to 1996. The first version of this Ford Bronco was put together using its own very chassis. The full pledged Bronco was a derivation of the popular company’s F-Series such as F-100, F-150. Every Ford Bronco came fitted with 4-wheel drive system.

When the demands for 2-door SUVs were reducing, the company had to remove the Bronco from the light-truck lineup. The car manufacturer later replaced this iconic SUV with a newer model in 1997 known as Ford Expedition. The successor was a 4-door model inspired by the F-150.

For many decades, the Ford Broncos were manufactured at the Michigan Truck Plant located in Wayne, Michigan. The American carmaker later re-introduced the Bronco in 2017 as a mid-sized SUV. The new Ford Bronco was based on the platform of Ford Ranger for the 2021 model year. Ford has also taken its production back to the Michigan Assembly plant.