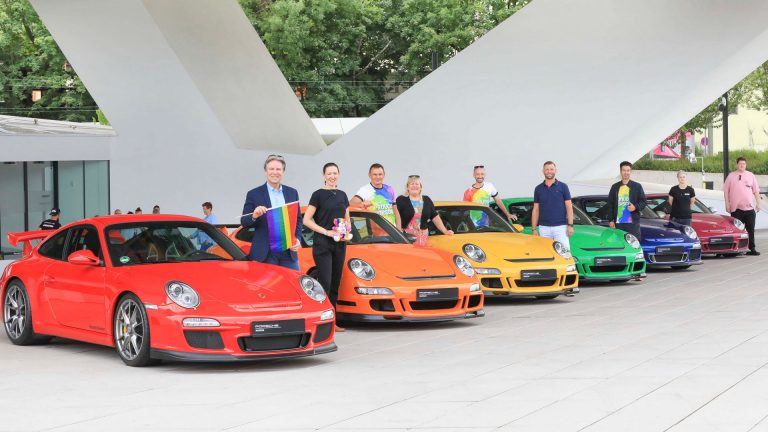 In a way of showing its full support to the gay movement, the German automaker has decided to showcase its rainbow-coloured line up of Porsche 911 models. This latest idea was part of the events that precede the Christopher Street Day pride festival in the country.

The 6 Porsche 911s in this beautiful lineup are yellow-coloured GT3 RS, blue-coloured GT3 RS, red-coloured GT3, maroon-coloured         GT3, orange-coloured GT3 RS and green-coloured GT3 RS. Recently, the carmaker has been flying the rainbow flag at its manufacturing plant located in Stuttgart, Germany. To further strengthen this support, the company’s workers also engaged in Virtual Pride Run where they dressed in brightly-coloured shirts.

According to Andreas Haffner, who happens to be the company’s executive board member for Human resources, said:

“We demand and foster equal opportunities and want to make it possible for all Porsche staff to contribute just as they are, regardless of elements including their gender, ethnic background, religion, disability, age or sexual orientation,”

Porsche is very much interested during its press meeting, in pointing out its stand on respect, tolerance and diversity. The automaker founded the Department for Equal Opportunities and Diversity to foster balanced working environment for every worker. By implication, the company is focusing on the skills and added value rather than individual differences.

Many luxury automakers alike are also showing their supports to this gay community. Not too long ago, the British luxury marque Bentley introduced its one-off Continental GT fitted with rainbow-coloured body wrap, showing 6 of the company’s custom paint colours.