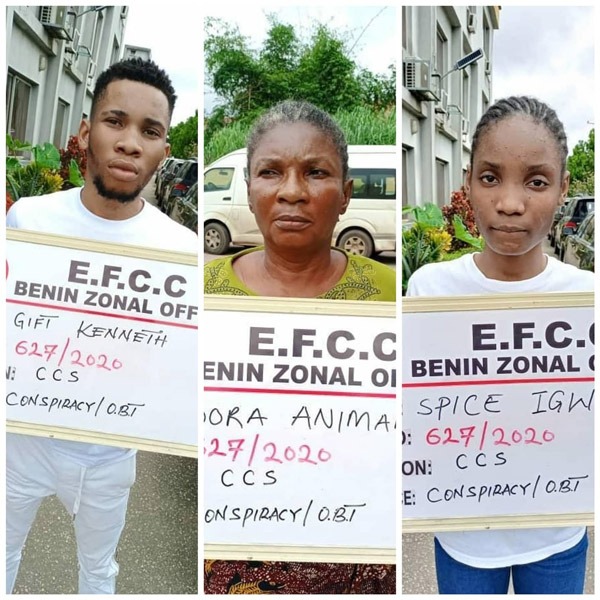 A report is just reaching us that a 22 year-old Kenneth Gift, has been allegedly arrested for internet fraud by officers of the Economic and Financial Crime Commission in Benin, Edo State.

The suspected yahoo boy, who was apprehended alongside his mother and girlfriend, is an undergraduate of the University of Port Harcourt.

The unit of the EFCC that carried out the operation reportedly seized 3 expensive Mercedes-Benz cars, all belonging to the arrested internet fraudster.

In a recent statement released this Thursday by the spokesperson for EFCC, Dele Oyewale confirmed the story. According to him, Gift Kenneth currently studies Computer Science at UNIPORT. His mother Dorah Animah and girlfriend Dandy Spice were also arrested in Agbor, Delta State. The arrest according to him was based on the petition received from the Federal Bureau of Investigation (FBI) from the United States.

“Their arrest was a sequel to a petition from the US Federal Bureau of Investigation, FBI, and intelligence by operatives of the Commission,” Oyewale said.

The EFCC has however made it known that these arrested suspects have been to write their statement and will be duly charged and prosecuted in the court according to the dictate of the law.

“The suspects have made useful statements and will be charged to court. This will be as soon as investigations are complete,”

Not too long ago, one 30 year-old Ogunfolaju and other members from his gang were apprehended at Lakers Hotel and Lake County Entertainment in Ikorodu area of Lagos for their alleged involvement in cyber-crimes.