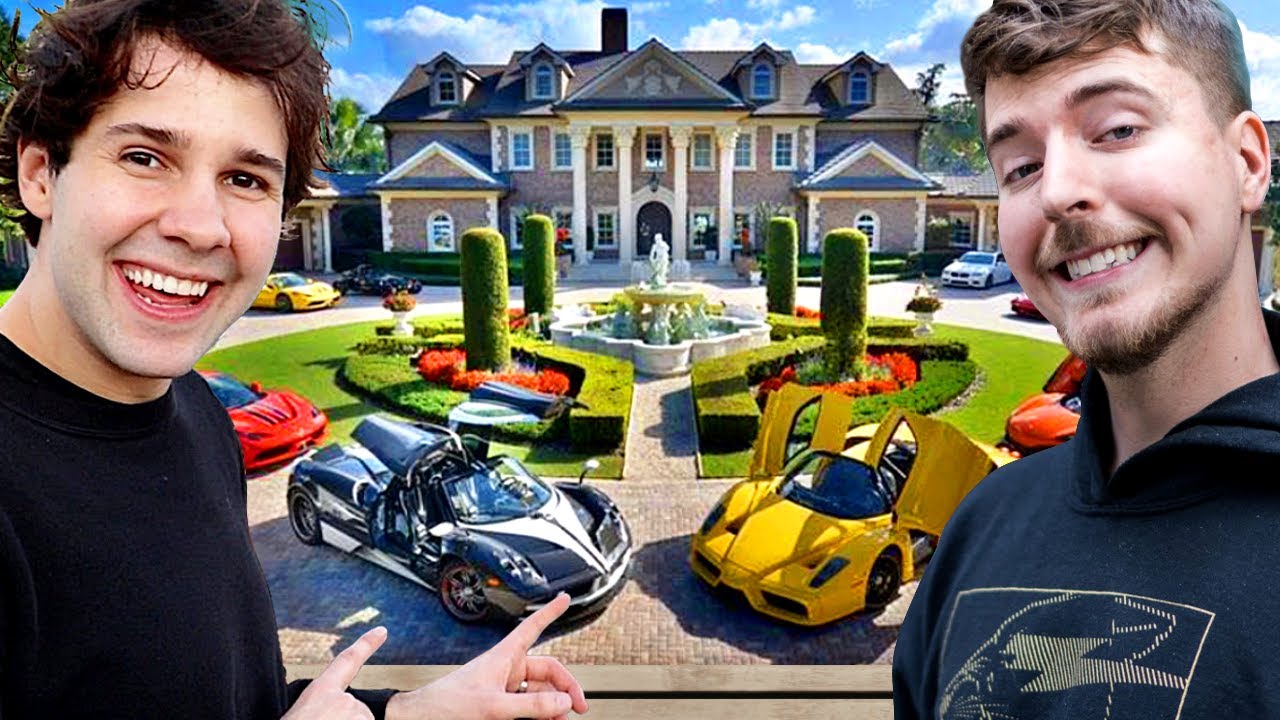 YouTube has become a go-to streaming site for people to acquire skills, learn new things and also have fun. This is why many YouTubers go the extra length to make awesome videos enough to catch the attention of these curious users. Many at times, what you see as fun and crazy videos, are money bags for these folks. For instance, MrBeast made a whopping $54 million in 2021 alone on YouTube. This explains why some people became insanely rich just by posting unique videos on YouTube. Of course, there are several Youtubers out there, but we have narrowed them down to the top 5 richest Youtubers. When you are that rich on a streaming platform, you can afford some of the most expensive cars out there. This is why are telling you about these richest YouTubers and their mouth-watering car collection

Top 5 YouTubers, net worth and cars

With over 90 million subscribers on his YouTube channel, MrBeast taking the number one spot as one of our richest YouTubers is inevitable. He is known for creating exciting videos, ranging from swimming with the sharks to recreating the squid games. This dude right here isn’t only a YouTuber, but a serial businessman. He is the creator of MrBeast Burger and other branded meals as well as an app. In fact, he has used his YouTube platform to sell over 5 million sandwiches. Jimmy has partnered over the years with Microsoft and Electronic Art. In 2021, He doubled up his earnings from 2020 and had 10 billion views combined. Mr Beast net worth as at 2022 is put around $30 million. There is a report that claims that he averages $3 million every month from YouTube. Those pretty figures might change your mind on how you have been under-using YouTube.

Mr Beast made headlines recently when he gave out some expensive cars to lucky subscribers on his YouTube. One of them was the $100,000 Lamborghini Aventador, which was won by a lucky winner.  He got a $60,000 Tesla Model 3 as a gift from ZHC Crafts, a fellow YouTuber. The electric cars known as Beastmobile was customized to his taste, including his channel logo. He also owns a BMW i8 2016 worth over $150,000. Interestingly, he didn’t buy this one with the money from his YouTube. Instead, he revealed he used the profits from cryptocurrency to buy it. Another car you will find in MrBeast car collection is the Dodge Grand Caravan minivan. Apparently, he bought this vehicle to cruise it with his friends.

Jake Paul and his brother Logan Paul are two sensational YouTubers. Jake is also a boxer who has paired couple of times with MMA fighters. He made $21 million in 2018, mostly from his boxing runs. Jake Paul had a drop in his income when his brother Logan posted a controversial video that made most of their sponsors cut them off. In fact, they were demonetized by YouTube. He uses his platform to promote his boxing career. While aiming at becoming the highest paid sportsman, Jake Paul net worth is estimated around $30 million.

Just when you think Mr Beast’s car collection is impressive, Jake Paul garage is filled with insane cars. Jake Paul owns a Lamborghini Huracan, worth over $200,000. He revealed that the model has been his dream car and had to wait for 6 months before he could drive it. He is also a fan of the electric as he owns a Tesla Model X. the vehicle was wrapped by West Coast Customs Design. Well, if you visit his home, you might be lucky to find his £360k Rolls-Royce Phantom. Guess Jake’s garage wouldn’t be complete without a powerful pickup. He acquired a Toyota Tacoma worth around £40,000. Other cars you will find in his collection include a Dodge Ram and a Ford Focus, all customized.

Markiplier has done lots of things on YouTube ranging from selling hoodies, T-shirts to becoming a TV star. He used to collaborate with Ethan Nestor-Darling, a fellow YouTuber, on Unus Annus videos. Guess the two had a fallout considering that Markiplier deleted the videos they made together from his page. With over 31 million subscribers on his account, he is undoubtedly one of the richest Youtubers in 2022. The American YouTuber is worth $28 million.

Mark Edward Fischbach popularly as Markiplier on YouTuber isn’t going to be left out in this luxury car charade. You will find Audi, GMC and a Toyota model in his garage.

These two exciting YouTubers started out as hosts of Good Mythical morning, a nerdy show, to forming an empire. One of their extensions on YouTube, Mythical Kitchen, a cooking series, already has almost 2 million subscribers within 2 years. The two hosted a family-friendly show in 2021, where they sold 70,000 tickets for as much as $50 a pop. Rhett McLaughlin, who happens to be the founder of the partnership on YouTube, is worth around $20 million.

Rhett and Link co-owned a 1992 Ford Bronco, to be used for camping and for business. The founder Rhett owns several cars. He drives a Scion xB, Dodge Dynasty, Oldsmobile Omega and a Dodge Intrepid. Link on the other hand drives a Honda minivan and a 1987 Nissan pickup truck.

Talk of making money out of Minecraft, Unspeakable is your guy. He has four channels on YouTube, with more than 20 million subscribers. Unspeakable usually posts videos of himself playing these pixelated video games. He is also known for trying crazing stuff in some of his other channels. One notable video where he filled a room with live alligators got a lot of attention from people. He also sold his video catalogue on YouTube to Spotter, which apparently put some money into his pocket. Guess his revenue from spotter, one of the biggest content creators on YouTube, made it possible for him to occupy a space in our top 5 richest Youtubers. Nathan, popularly known as Unspeakable is worth $16 million from creating videos on Minecraft.

From monster truck to a Porsche supercar, Unspeakable has always excited his subscribers on YouTube with amazing rides. Aside from playing the Minecraft game, he loves to talk about cars. It isn’t surprising that having more than 13 million subscribers on a single channel could be enough to give him enough cash to splurge on cars. In 2018, Nathan shared a video of his new car, a custom-made blue Nissan GT-R.