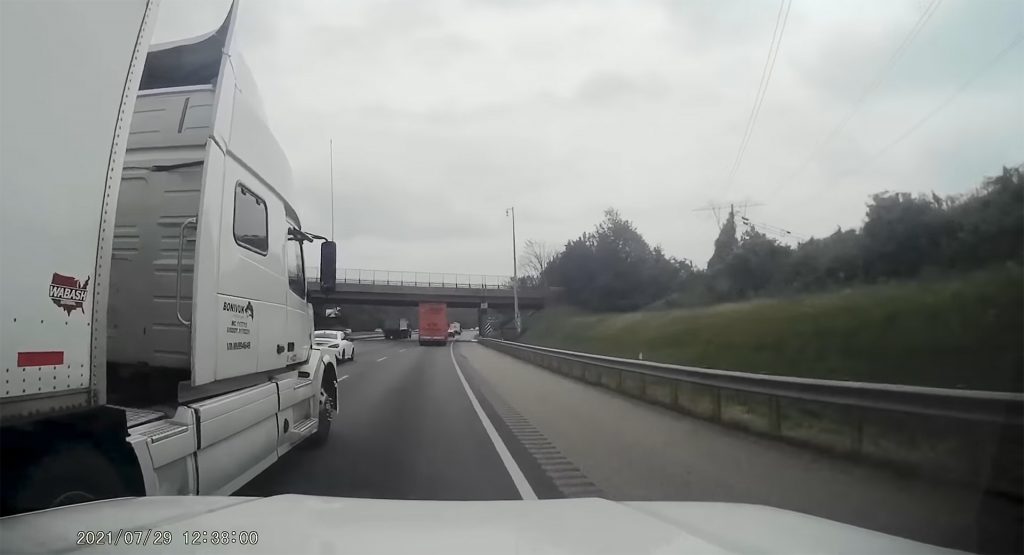 Road rage is never a good thing, as even if it’s provoked, often times it puts the lives of others at risk. Case in point, this incident in which a truck driver, seemingly completely unprovoked, tried running a car off the road twice an threatened them with a hammer after they pulled over.

The video begins with the dashcam car driving down the highway, and after about a minute of that, a semi-truck moves into frame in the right lane. We then see the semi truck’s driver look to his left, then proceed to run the dashcam car out of the middle lane. Its driver quickly moves to the other lane, then speeds up to avoid the truck. About a minute later, the semi-truck returns in the left lane. He tries running the car out of the middle lane again, only this time in addition to pushing them one lane over, he also forces them of the actual road and nearly into the guardrail. It comes so close that even the truck driver himself was riding the shoulder of the road.

Thankfully, the car narrowly escaped a serious accident by slowing down out of the truck’s way – but it wasn’t over yet. They trailed behind the truck for a bit, then according to the original Reddit post, they pulled over to call 911 suspecting there had been a collision. The truck driver, who was still in front of them, noticed this and pulled over as well. As they were stopped, he got out of his truck, came over to the car, and threatened them with a hammer until he heard the 911 operator on the phone.

See also  What made electric bus charging stations in US an endless investment possibility?

The original poster also uploaded another video recorded before the incident, as some people were under the impression that his mother, who was driving the car with his 3-year-old twins at the time, might have done something to provoke the truck driver. As it turns out, there was seemingly nothing done, and even if there was, that still doesn’t justify the truck driver’s actions.