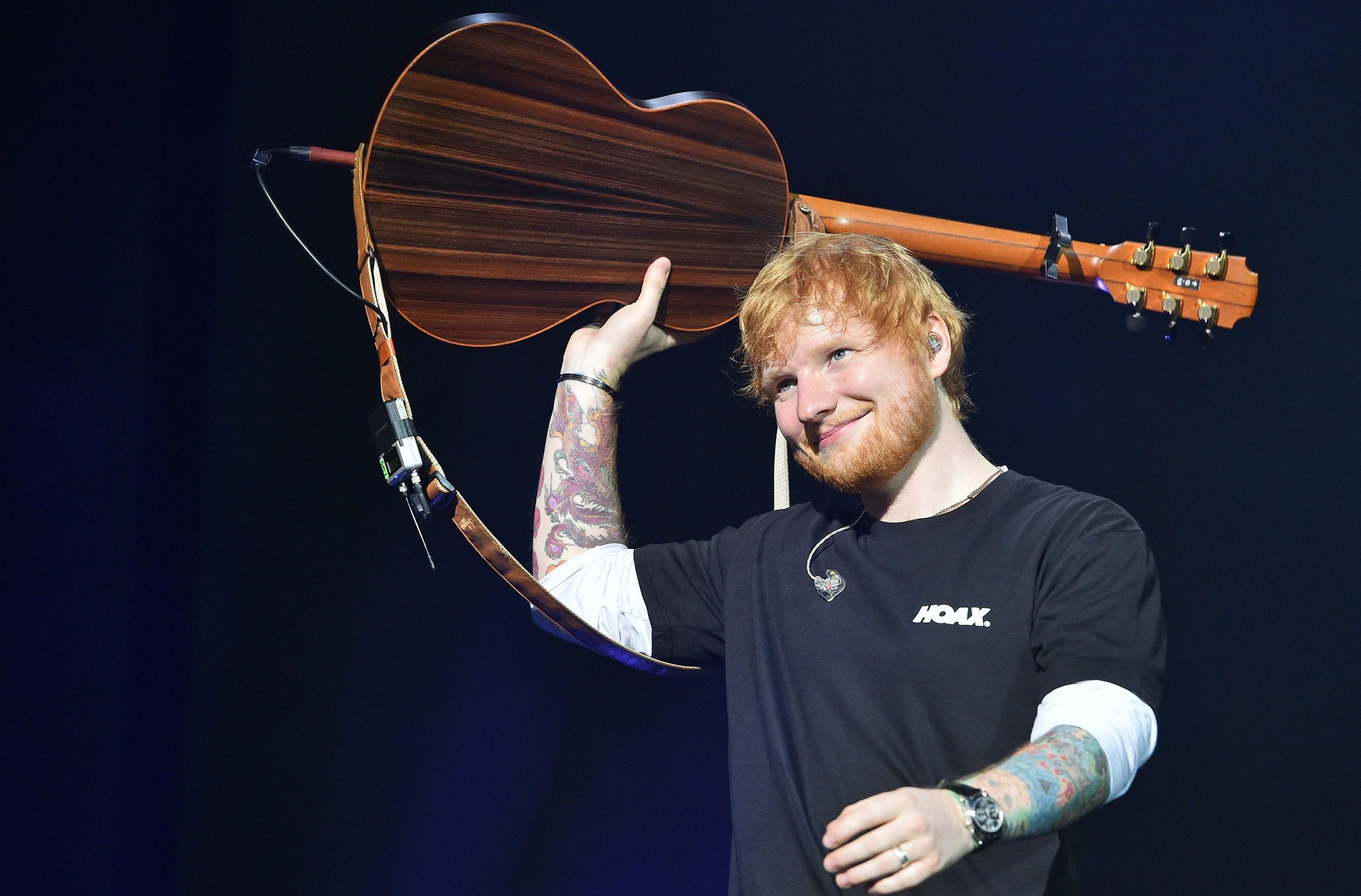 The award-winning Edward Christopher Sheeran is a popularly known British-born singer, songwriter, actor and record producer, of the pop, folk pop and hip hop genres. His first hit song “The A Team” was part of the hit songs in his Album, that won him British Breakthrough Act and Brit Awards for Best British Male Solo Artist. Ed Sheeran is one of the most celebrated music artistes on the planet, with most of his songs topping the worldwide music charts.

In 2015, his second album “x”, which means multiply, earned him the year’s second-bestselling album globally and Album of the year at the Brit Awards in the same year. “Thinking Out Loud”, a song from this amazing album, received the Grammy awards for Best Pop Solo Performance and Song of the Year in 2016. His subsequent album “÷”, which means divide, was the 2017 bestselling album of the year. Ed Sheeran and Andrea Bocelli Perfect Symphony is one of the major feats in his illustrious career.

With many awards won over the years, He has sold over 150 million records globally, earning him the spot among the all-time bestselling UK and world artistes. He was named by Spotify as the second most streamed artiste of the decade. Ed made a special appearance in the 2019 movie titled “Yesterday”. 2 of his albums have been named among the all-time bestselling UK albums.

Ed was born on the 17th of February 1991. The 4-time Grammy-winning UK artiste is presently 29 years old.

Ed Sheeran was born in Halifax, West Yorkshire in England. His father was a curator at Cartwright Hall, Bradford and also a lecturer while his mother worked at the Manchester City Art Gallery. Although, his paternal grandparents are from Ireland, but his parents – John and Imogen are both from London. His older brother Matthew Sheeran is working as a composer. He studied Artist Development at the Access to Music and also a patron of British Youth Music Theatre.

Ed once dated Nina Nesbitt, a singer and songwriter from Scotland, before breaking up eventually after she made an appearance in his “Drunk” music video in 2012. He also reportedly dated Athina Andrelos in 2015, but they parted ways in 2015. In July 2015, Ed started a romantic relationship with Cherry Seaborn, his childhood friend and former classmate at high school. They eventually got married in 2019 after announcing their engagement in the previous year.

Lyra Antarctica Seaborn Sheeran was born in 2020. Ed Sheeran and Cherry Seaborn announced the birth of their first child, a daughter.

If there is one thing he spends a lot of money on; that should definitely be his toys. It might sound strange to many, but the 29 year-old English singer loves treating himself specially to expensive toys. He disclosed he spent most part of his childhood behind guitar and books. So, it’s fair to say he is trying to make up for the experiences he missed while growing up. He got himself the Star Wars Death Star Lego kit, £2000 worth of Nerf gun, pirate ship and even wheelie shoe. Ed has plenty of kids’ toys, part of which also includes room filled with teddy bears and 2 massive pandas right in his sleeping space.

The talented UK artiste is said to have over sixty tattoos on his body. He paid a tribute to his Irish root and grandfather with a 3-leaf clover on his arm. He also tattooed Lego head as a way of remembering his hit song “Lego House”. Ed tattooed the autograph of Damien, who we learnt is his idol, on the forearm.

Ed Sheeran is estimated to worth around £200 million, making him one of the richest music artistes in the United Kingdom. He has been able to amass this wealth through his record sales success, online streams, music global tours and endorsement deals with big brands such as Heinz, Nando, Hoax, Dunlop Manufacturing and several others.

The English artist is known for his simple lifestyle despite his net worth and global success. He is obviously not the type that flaunts his possession on social media. We were a bit lucky to get hint of some the cars you will find in his collection.

Ed is indeed a man full of surprises. Of course, we know he is a very rich man. Buying a Mini Cooper was less of a worry to us, but the fact that he didn’t know how to drive it really got us. The Mini Cooper was reportedly his first car. The mini Cooper is a British-owned luxury brand established in 1969. The ownership was transferred to BMW in 2000. His Mini Cooper is powered by a turbocharged 1.5-liter 3-cylinder engine with 134 horsepower, all mated to 6-speed manual transmission.

Cherry Seaborn’s husband was recently spotted around the cargo area of this beautiful German product. The Mercedes-Benz R Class is a big luxury MP introduced by the automaker in 2005. Its design is based on the platforms of GL-Class and M-Class. The model offers both petrol and diesel engines with a mileage of 11.8 kmpl.

The Lincoln Town Car is another model you will find in his collection. It is a full-size luxury model marketed by Lincoln division of the Ford Motor Company. The model line was produced for 3 decades, covering 3 generations (1981 to 2011). It is the flagship sedan model for the Ford Company.

The Mercedes Benz G-Wagon is no doubt one of the most expensive cars you will find in his garage. After all, Ed Sheeran has some hidden good taste for luxury cars. The Mercedes G-Wagon is from the G-Class lineup and one of the longest serving flagships from the Daimler group. It is 4-wheel mid-size luxury SUV produced in Austria and sold by the German automaker.  The G-Wagon is one of the very few cars in the world to have 3 fully locking differentials feature.

He has been spotted with this particular model from the British luxury marque on many occasions. We think it’s safe to say the UK music genius actually fancy this one. With a top speed of 190 mph, his Aston Martin DB9 can sprint from zero to 60 mph in an impressive 4.6 seconds. Being one of the most sought after supercars for a decade now, the 4-seater coupe is powered by a V12 6.0-liter engine with maximum generative output of 510bhp.

The English singer and songwriter, owns a property in Suffolk known as “Wynneys Hall” dubbed “Sheeran Ville”. This massive compound comprises many properties he bought over the years. However, inside this estate, Ed Sheeran’s main residence was bought for almost a million pound in 2012. It is a massive modern farmhouse. He reportedly bought several houses close to this building such as next bungalow beside his property and even the house next door, which he purchased for his parents.

His properties have seen lots of improvements and modifications overtime such as magnificent tree house, indoor swimming poor, tunnel pub, decking, hot tub and many more that will make anyone not to want to leave there.

Interestingly, He grew up very close to this property. Probably, he nurtured this dream right from childhood since his parents live nearby as well. The entire property is estimated to worth around 9 million pound. The British artist also said to own 5 apartments worth £3.9 million in the Wiverton Tower, Whitechapel. In Holland Park, he has another mansion estimated roughly around £20 million.

Despite being the down to earth type of guy, he still prefers to fly with class. Since Ed Sheeran gets bothered on Virgin flights, he loves to travel by private jet all over the world. He was recently spotted with his entourage going through the Exeter Airport to board his private jet. It was rumoured he acquired this private jet for $27.8 million.

Good music lovers around the globe are known to love Ed Sheeran lyrics as well as other things associated with his career. Some of his popular songs include:

You can also check here for Ed Sheeran tickets information

Ed Sheeran is one of the most celebrated UK artistes in the 21st century. He has done really well for himself in the music and entertainment industry as a whole. We hope you had fun knowing more about him. If you do not mind, we have loads of other celebrities’ car collections for you here!