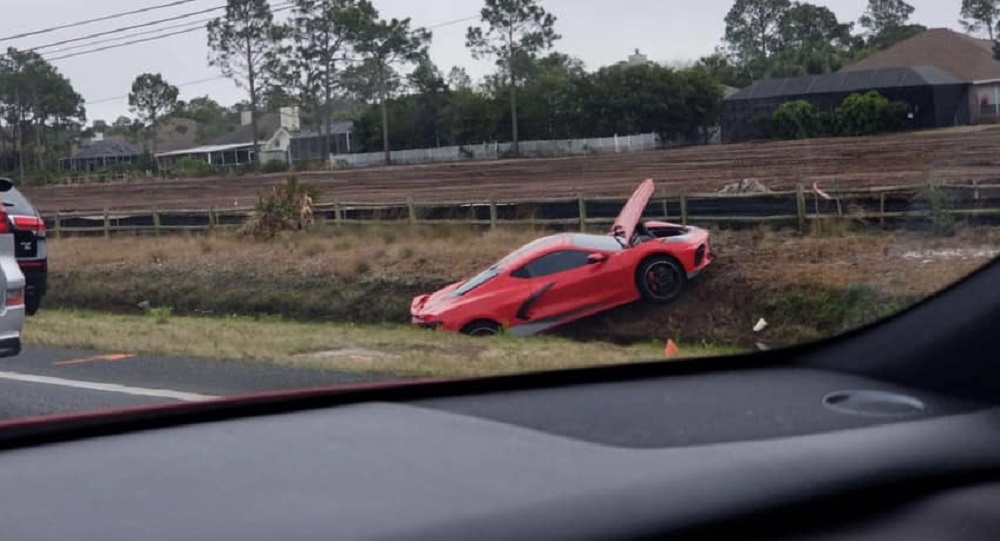 Mustang is about to have a ditching rival brand very soon. It appears Chevrolet needs to tutor its buyers on how to carefully drive Corvette on the road. This image of a ditched Chevrolet Corvette in Florida might come as a shock to many, but it is becoming a trend in some parts of the US.

We doubt if the owner or person behind the wheel sustained any injury from the crash since the car looks intact. The only damage we saw in the second picture posted on social media is on the front-end with a bit of open frunk and bent front lip. We are a little concerned about the position of the rear of this wheel, considering it is sitting on water.

So far, no major information has been revealed on what led to this incident in the first place. We are suspecting excessive speeding but we never can tell until we get on substantive evidence. According to the information released on Facebook by the C8 Corvette Owners Facebook page, the crash involving the mid-engine corvette happened on the Gulf coast, close to Tallahassee.

Since the month of August in 2019, the country has recorded a minimum of 12 C8 incidents. Presumably, the people handing this powerful model do not understand how to. It breaks our heart seeing such a beauty ending up in a ditch.

This type of news is not good for the image of the car brand and it will not sit pretty with customers and lovers of Chevrolet C8 Corvette. Maybe, some might be asking for a refund if it is possible. This obviously takes nothing away from how incredible the model is and the fact that it offers a very rare Carbon Fiber package to potential owners.