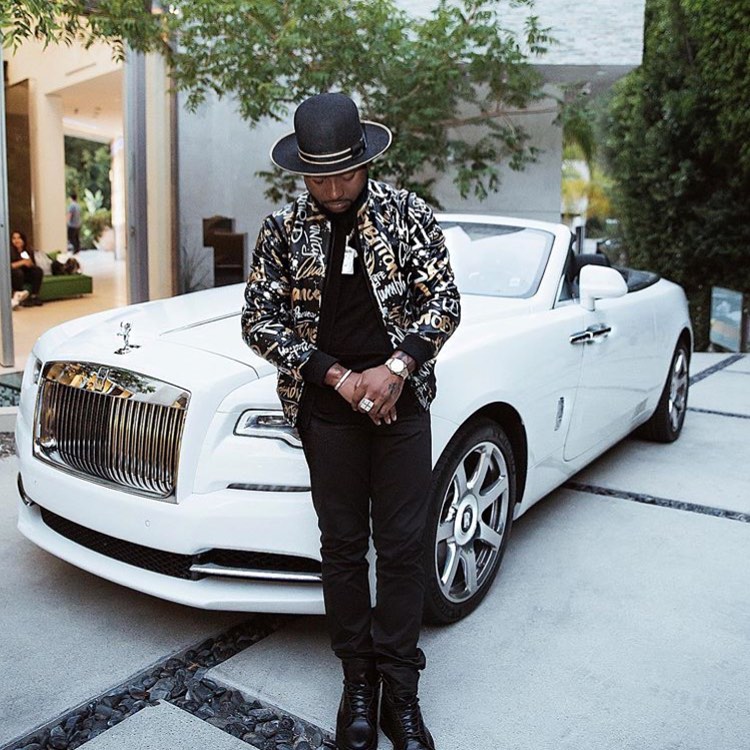 We obviously do not expect less from the CEO of the “30 billion gang” movement, especially the kind of wheels in Davido’s car collection. Being the co-founder of HKN Music, one of the most successful record labels in Africa, Davido is apparently nothing short of excellence.

1. Davido’s biography and net worth

Born 21 November 1992, the American-born Davido Adedeji Adeleke popularly known internationally as Davido is an award-winning Nigerian singer, songwriter and record label owner. He was reportedly born in Atlanta, United Stated, but grew up in Lagos, Nigeria. Born into family of a business magnate, Davido made his first music appearance with the KB International music group. Davido also known as O.B.O (acronym for Omo Baba Olowo) had to drop out of Oakwood University where he was studying business administration, to fully pursue his music craft.

He was shot to stardom after the release of the single “Dami Duro”. He went on to release several hit songs such as “Skelewu”, “Feel Alright”, “Aye”, “Fall”, “If” and others, placing him as one of the best music exports from Africa. Due to his father’s insistence, Davido finally finished his university education at the Babcock University in 2015.

Davido is presently a member of 3 record labels – HKN Music, RCA Records and Sony music Entertainment. His net worth is estimated at $16 million.

Davido currently has 3 children with different women, but is engaged to Chioma, who happens to be the mother of his third child. He had a child with Sophia Momodu, the daughter of the famous Ovation Magazine Founder Dele Momodu.

His relationship with Sophie resulted to a daughter despite the age difference and feud between the two that lasted for a while. After he ended the relationship with Sophie, he shortly dated Amanda, a model based in Atlanta, who also bore him a child. His two baby mamas – Sophie and Amanda have been spotted together especially at Davido’s live concerts.

Davido kick-started his illustrious music career with Next Rated award at the 2012 Headies Awards.  Ever since, he has received several local and international awards and nominations. Some of these awards include:

See also  Mercedes horror! Popular hair seller Mizwanneka cries out after getting a bill of over ₦1m for 2 tires

For many years now, there has been a big rivalry between Davido and Wizkid in terms of who is more successful or globally known. We don’t know if that rivalry has gone beyond music to car collection. One thing we are very sure of on cars9ja is that Davido’s car collection is an embodiment of speed, class, luxury and black excellence.

One of the exotic wheels in Davido’s car collection is this white Bentley Bentayga. David teased his million fans on Instagram with this luxury SUV. He acquired this beast-looking ride in 2018 for the sum of ₦108 million.

Davido acquired this Honda Accord model for a sum of ₦4 million. Although it is one of the cheapest rides in his garage, but the car sure has its purpose. It comes powered by a 2.4-liter engine with an output of 200 horsepower and well styled interior leather upholstery.

The O.B.O crooner boasts of a ₦17 million worth of Chevrolet Camaro GS in his illustrious garage. We learnt Davido has touched its exterior paintjob at least 3 times.

Although this ride is commonly used by Nigerian political officer holders, Davido certainly has one in his collection. His Toyota Land Cruiser can accelerate from a standpoint of zero to 60 mph in 8.6 seconds, and a peak speed of 210 km/hr.

Davido got this ₦35m Range Rover Sport as a Christmas gift. Land Rover Range Rover has a reputation for performance, safety and comfort. Davido will sure rock this elegant SUV to anywhere he feels like without any reason to worry. Music certainly pays!

Porsche Carrera is one of the fast whips you will find in Davido’s car collection. From report, Davido used to dream of getting one. Looks like that big dream of his has finally come true.

Davido bought this Mercedes Benz Sedan AMG for a sum of ₦40 million in one of his tours in the United States. This power SUV is sitting powerfully in Davido’s car collection.

Rolls-Royce Phantom is one of the most sought-after luxury cars by most celebrities across the world. Luckily, Davido has the white version. According to report reaching us, the music star purchased this exquisite ride for a whopping ₦100 million. His Rolls-Royce Phantom offers premium cabin design, rich with leather upholstery and natural wood trim. Davido’s Phantom is powered by a V12 6.75-liter engine and a generative output of 453 horsepower. The exotic car promises a top speed of 240 km/hr, sprinting from zero to 60 mph in 5.9 seconds.

Davido got this ₦7.5m Hyundai Sonata as part of the goodies of being the winner of Next Rated artist at the Headies.

Davido got this Audi R8 supercar as a gift during his 23rd birthday celebration. He fancies this fast car a lot since he has been spotted in it several times. At a retail price of ₦20 million, Davido’s Audi R8 offers aluminum and carbon inserts. The supercar can sprint from zero to 60 mph in a remarkable 3.2 seconds. It has a top speed of 317 km/hr.

Davido recently announced his latest acquisition, which was a Lamborghini Urus SUV. He reportedly acquired this luxury SUV for ₦72.25 million ($200,000), excluding of shipping fee and clearing cost in Nigeria. His Lamborghini Urus is powered by V8 4.0-liter engine with an output of 650 horsepower and 627 pound feet of torque. The engine is mated to 8-speed automatic transmission and can sprint from zero to 62 mph in 3.6 secs.

Davido has shown us that he is a big fan of fast cars. This Porsche Panamera Turbo S is another testament to such.

Like several other Nigerian celebrities, Davido is a proud owner of this beautiful-looking Range Rover Autobiography SUV. We learnt he bought this SUV for ₦98 million.

We almost got worried that a superstar like Davido might not own more than one Mercedes product. This Mercedes-Benz G-Wagon has proven us wrong after all. His G-Wagon is an off-road beast, making it easy for Davido to access anywhere in the country he wants in style.

3. Davido’s luxury homes in the US and Nigeria

Since he was born in Atlanta, Georgia in the United States, Davido felt it deem fit to have a housing property there. He acquired this beige and cream 2-storey building.

Davido’s Lekki home looks more luxury and spacious than the one at Atlanta but way cheaper. The beautiful Lagos home boasts of exquisite kitchen space, Jacuzzi, swimming pool and a gym house. The house is located at Number 2B, Price Adelowo Adedeji Strt., in Lagos.

OBO crooner recently teased his fans on social media on his just acquired luxury home in Banana Island. unarguably, Banana Island is the most expensive neighborhood in West Africa. To afford a house in this rich neighborhood, your account balance must be really loaded. This shocking revelation was made in one of the videos where Davido took his fans through his Banana Island mansion.

Davido is one of the youngest owners of private jets in Nigeria. He reportedly acquired this private jet – Bombardier Challenger 605 for ₦5.4 billion ($15m). The model was introduced in 2006, which means Davido might get it fairly-used. The brand new 605 private jet was sold for ₦9.7 billion ($27 million) as at that time. The acquisition however caused a lot of uproars on social media considering the inability of Davido to afford such expensive private jet.

Davido obviously loves buying cars. We might not have covered all the cars in his garage, but we know his garage should worth billions in naira. He is a hard worker despite the financial status of his father. Davido’s car collection is proof that top artistes in Nigeria are really cashing out big. If you are interested in the car collection of other celebrities, click here!