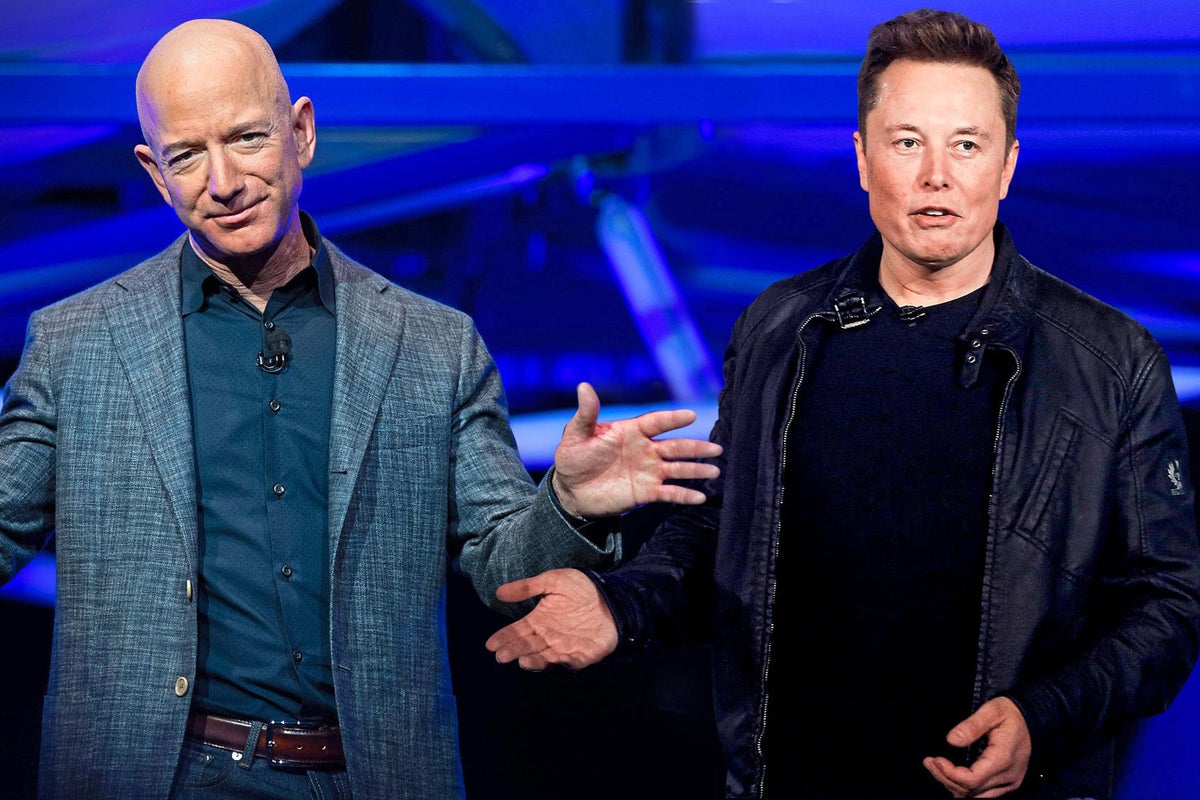 1. Introduction – Who is richer between Elon Musk and Jeff Bezos?

Talk of fierce money competition in recent years, Tesla boss Elon Musk and Amazon CEO Jeff Bezos will surely come to mind. For the very first time, we had two people occupying the world richest position in the space of a few months.

Elon Musk dropped down from the first position after Tesla recorded a big decline in its stock as revealed recently. This however resulted in a big drop in the price of Bitcoin, widely considered the biggest cryptocurrency in the world.

Elon Musk’s company losing as much as 8.6% in firm stock, led to the net worth of Elon Musk decreasing by slightly over $15 billion dollars in just a day! At the time when Jeff Bezos regained his number one spot back with a net worth of $191.2 million as at February 2021. Before Bezos lost the number one spot to Musk briefly, he held the position unchallenged for 3 years.

Mind you, the world’s richest man’s position is up for considering Bill Gates who is now in third position actually held the top position for so many years. So, we keep our fingers crossed as to what the nearest future holds for these two business icons. Now, back to why we are here; we will be comparing Jeff Bezos net worth and that of Elon Musk, while showing you a lot you didn’t know about them, including their cars, houses and private jets.

2. What is Jeff Bezos net worth?

Born on the 12th of January 1964, Jeffrey Preston Bezos is a business tycoon and an investor, who was born in New Mexico in the United States.

Jeff Bezos attended Princeton University, where bagged a degree in electrical engineering and computer science in 1986. He worked on several related fields on Wall Street from the periods of 1986 to the beginning of 1994. He founded the Amazon in 1994 during a trip he took to Seattle from New York City. The Amazon that was created during a road trip has gone to become the world’s largest online sales company today.

The current world’s richest man also created Blue Origin, which is an aerospace manufacturer and sub-orbital spaceflight services in 2000. Its New Shepard vehicle got to space in 2015 and landed back successfully on earth.  He is also the owner of The Washington Post, which is one of the biggest newspaper companies in America for a sum of $250 million. He holds several other businesses and investments through his venture capital company.

According to Forbes 2021, Jeff Bezos is considered the richest man in the world at a staggering net worth of $186 billion. He met his novelist wife Mackenzie Tuttle in 1992, and they tied the knot in 1993. It was a year after that Bezos founded Amazon. Jeff Bezos was lucky to escape a helicopter crash with minor injuries in 2003, when its tail’s boom hit a tree and crashed in West Texas. Many didn’t know that Jeff Bezos had appeared in a movie before. He played the role of Starfleet official in ‘Star Trek Beyond’ in 2016. In 2019, Jeff and his wife Mackenzie went online to announce their separation, where she got a $25% settlement of $35.6 billion.

3. What is Elon Musk net worth?

Born on the 28th of June 1971 in Pretoria, South, Elon Musk is a serial businessman, founder and CEO of SpaceX. He is most notable for his position as the CEO of Tesla, one of the biggest electric car manufacturers in the world. He created the ‘The Boring Company’ and also co-founded OpenAI and Neuralink.

Without any doubt, he is one of the richest men in the world in 2021. He holds citizenship for three counties – the United States of America, Canada and South Africa. He is also the founder of X.com, which is now part of PayPal. He was the chairman of SolarCity, a company that is now part of Tesla Energy.

Elon Musk was born to a South African father and a Canadian mom, where he was raised in Pretoria in South Africa. He relocated to Canada at the age of 17, where he attended Queen’s University. 2 years later, Musk got a transfer to University of Pennsylvania where he bagged a degree in economics and physics. In 1995, the business tycoon was about to attend Stanford University when he moved to California. Instead, he decided to chase after his dream, which of course was business.

Elon Musk joined his brother Kimbal to create ZIP2, a web software company. The fast-rising company was acquired in 1999 by Compaq for a sum of $307 million. Musk’s X.com was also acquired as part of a merger by eBay in 2002 for a sum of $1.5 billion.

He founded SpaceX in 2002, an aerospace maker and space transport services firm. He joined Tesla in 2004, where he rose to the position of product architect and chairman. At a net worth of $147.3 billion, Elon Musk is considered one of the richest men in the world right now. He lost his number spot recently to Jeff Bezos, after experiencing a fall in Tesla’s stock.

He met is Canadian author wife Justin Wilson while he was a student at Queen’s University. They got married in 2008 and divorced in 2008. He lost his first son Nevada Alexander Musk to infant death syndrome. The duo share custody of the remaining five children till now. Elon Musk also married Talulah Riley, an English actress in 2010 and separated in 2012. His most recent romantic relationship was to Grimes, a Canadian musician. The couple gave birth to a son in 2020 named X Æ A-Xii.

Since we have all agreed that Jeff Bezos is richer than Elon Musk, you might need to check out what they have sitting in their garage. We all Know Elon to be the CEO of one of the biggest EV car makers on the planet, but the question is: how about the Amazon CEO? Check out some of the cars in Jeff Bezos car collection:

Jeff Bezos owns quite a fascinating collection of cars. Shockingly, despite the plethora of luxury cars in his garage, he still fancies his 1996 Honda Accord above all. The billionaire owns a Ferrari Pininfarina Sergio, which he acquired for a sum of $3 million.  He also owns other luxury cars such as $3.4Bugatti Veyron Mansory, $4m Lykan Hypersport, $4.8 million Koenigsegg CCXR Trevita, and a $5m Lamborghini Veneno.

Being the world’s richest man comes with lots of goodies. One of them is flying around the world in style. The Amazon boss, like many billionaires all over the globe, owns a private jet. He is reported to own the Gulfstream G650ER, which he got in 2015 as a replacement for his Dassault Falcon 900EX. The jet has the capability to fly almost halfway the planet before requesting for a refuel.

Elon Musk isn’t going to be left behind when it comes to air luxury. Like Jeff Bezos, the Tesla CEO owns a Gulfstream aircraft, which will come handy anytime he decides to visit his car factories and rocket launch sites. The tech mogul acquired this massive G650 private jet for a sum of $14 million.

The business mogul is said to own a luxury yacht worth around $1.2 billion. The massive yacht is said to hold a smaller yacht and a hold for a helicopter to ride along.

Elon Musk has revealed his plan to build a self-sustaining party yacht, but we are not sure if one of the wealthiest men on the planet owns one in particular. There is a speculation that he owns an all-electric super yacht worth around $250 million. Once we get our hands on it and verify this rumour, we will update you here.

The world’s richest reportedly owns a minimum of four massive estates all over the US. He owns a luxury mansion in Medina in Washington, which he acquired for $10 million and renovated it in 2010 for $28 million. He owns a Spanish-styled mansion in California, which he bought in 2007 for $24 million. The billionaire also owns the Van Horn mansion in Texas and another building in the US capital, which he got for $23 million.

Eon Musk has a large portfolio of over 7 houses worth around $100 million. He owns 6 mansions close to one another in Bel Air. Not too long ago, the social media-savvy Musk revealed his plan to sell all his physical properties. We can’t say for now if he actually meant it or trying to have fun with his loyal followers, especially on Twitter.  Most of his landed properties are in Los Angeles. At the time, he used one of these luxury houses as a private school for his five children.

When you are as rich as Jeff Bezos and Elon Musk, you can literally buy anything in this world, including an entire country. These are men who hold the jugular of the global economy with other top billionaires. We cannot really compare their cars and other things they own. One thing we can say is:  they are living people’ dreams.