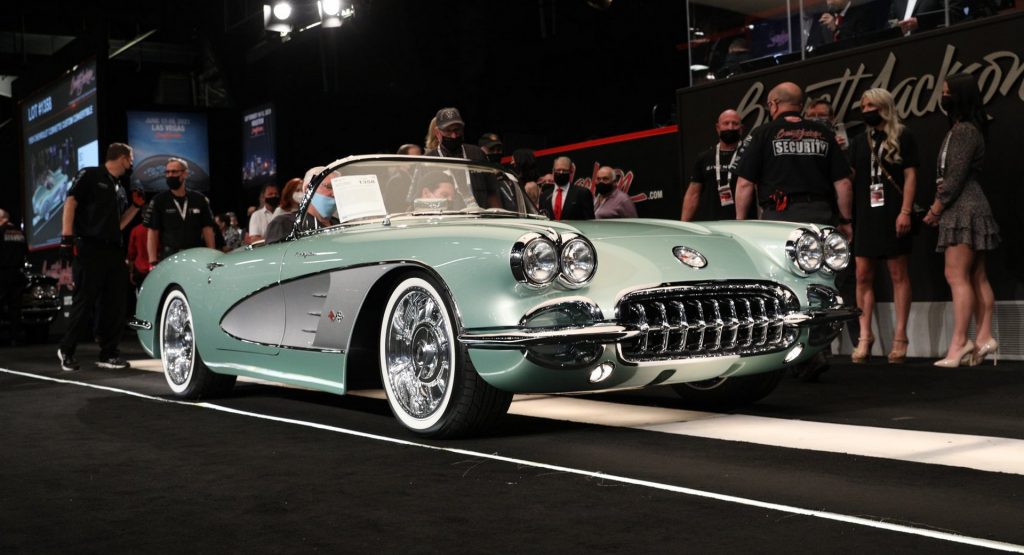 Without any doubt, ace American comedian Kelvin Hart has proven himself to be a big fan of cars, ranging from modern to classics. One of those models he adores a lot is the corvette, where he ended up splurging as much as $825,000 on one at the Barret-Jackson’s Scottsdale auction.

Having gone through lots of performance upgrading, the vintage 1959 C1 Corvette is now powered by a V8 LT1 6.2-liter engine with a generative output of 460 horsepower and 465 pound feet of torque, all mated to 4L75E automatics.

The suspension hasn’t been left untouched as it has been upgraded to work properly with the tuned engine. The Corvette now features an Art Morrison C7 Independent front suspension with Strange coilovers and adjustable ride height. Modification has also been done on the brakes, which now offer 6-piston calipers at the front of the car.

EVOD had to create distinct one-off wheels for this 1961 Corvette in order to make it fit perfectly with the 14-inch disc. The wheels offer a center knock-off nut, which are wrapped in shaved Nitto tires. There is also the availability of rack and pinion units with power assistance in order to ensure smooth handling.

Expectedly, the whole modification was just a frame-off restoration. The frame was powder coated in Cadillac Gray. The body has been stripped with glass beads, where it is finished in Franny Green and Global High Solids clear. The painter decided to take it further by repainting the underside of the corvette in black and ceramic coating finishing. The restored convertible top is finished in Chocolate Brown Stayfast material.

On the inside, the vintage model features Led lighting throughout, Dakota Digital gauges, JL Amplifier and Bluetooth connectivity. Kelvin Hart’s 1961 Corvette has only seen 150 miles since its restoration. Hopefully, we will see the comedian in it pretty soon.