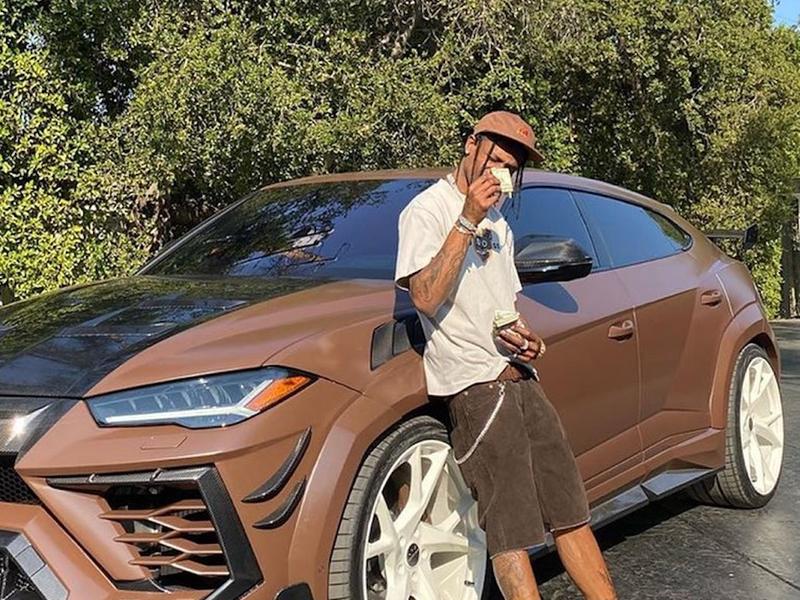 This is one of the best answers you can get if you are wondering what made Kylie Jenner head over heels in love with Travis Scott. Despite the damaging effect of the covid-19 on artistes’ tour plans and gigs all over the world, some of them are still balling big and hot. The Houston artiste is having one of the best years of his musical career, coupled with series of mouthwatering partnerships with massive companies like McDonalds, Nike and Fortnite.

Not too long ago, Travis Scott with the real name Jacques Webster decided to spoil himself a little by flexing his customized Lamborghini Urus SUV and tasty pair of Supreme x Nike sneakers.

The modified Lamborghini Urus represents one of the interesting things about Travis Scott, which is incredible collaborations. The Lamborghini had its first modification job with the iconic Mansory in Germany before being taken to the legendary West Coast Customs in California for unique body job. The model was given the touch of Mocha brown, which from what we learnt is Travis Scott’s favourite colour. When you check his car collection, you would see his Lamborghini Aventador, Mercedes-Maybach G650 and Range Rover all painted in this particular colour.

The interesting thing about this car is that it features black carbon fiber and white rims, which contrast the colour of the Nike Air Jordan sneaker Scott partnered with. Well, the pair of sneakers goes for $2,000 dollars if you are interested. From the closed-up picture of the wheels of this $400k luxury SUV, we notice it features one of the many nicknames of the artiste, which is ‘Cactus Jack’ right on its brake calipers and center caps.

Mansory has an unrivaled reputation when it comes to modifying luxury vehicles and obviously its addiction to carbon fiber. All these come at a huge price, if you are willing and capable of splurging. Travis Scott reportedly splashed an extra $665,000 to get these outlandish modifications done. By calculation, the amount he spent altogether on this Lamborghini Urus SUV to look this amazing way would be over a million dollars.

With a net worth of $40 million, he is more than capable to afford such an exotic ride. Travis Scott is presently burning out time in the studio on his upcoming 4th studio album tilted ‘Utopian’, which will be released next year.

See also  10 richest actors and the expensive cars they own