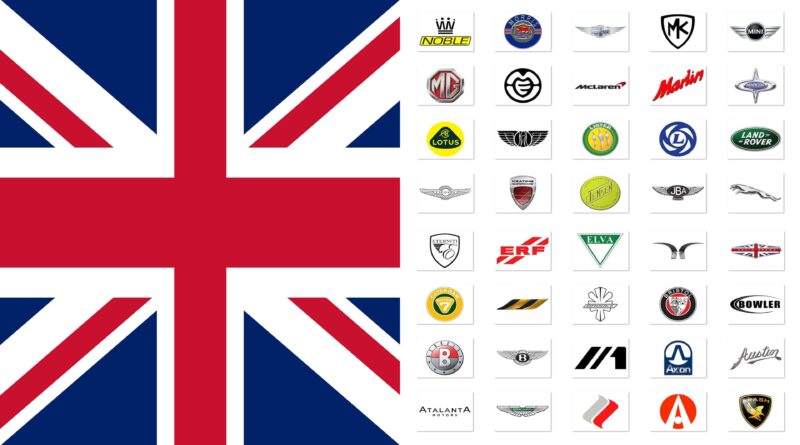 No way you will mention major players in the European automotive market that you would leave out the British car companies. Their products are not only used in Europe, but other parts of the planet. A brand like Rolls-Royce has become popular among movie superstars, politicians, business tycoons, royal families, musicians and several other influential people around. Just like Rolls-Royce, we have other luxury brands like the Land Rover, Bentley and so on. This is to show you how far British has gone when it comes to well-styled and high-performance automotive designs. Here are some of the popular car companies in the United Kingdom and their logos.

Jaguar is one of the most iconic car brands in the UK, with almost 100 years of being in the business. The company was founded in 1922 and headquartered at Whitley in Coventry. Jaguar motor company was created by William Walmsley and Sir William Lyons. It was originally Jaguar Land Rover, before it was bought by Ford and more recently Tata Group from India. Since inception, some of their best models till date include Jaguar Mark 1, Jaguar Mark 2, Jaguar F-Pace, Jaguar I-Pace, Jaguar XKSS, Jaguar XJR-15, SS Jaguar 100 and Jaguar F-Type.

No British SUV brand has given American SUV companies a run for their money like the Land Rover. Apparently, we can attest to this through their popular models like Range Rover SUV variants, Land Rover Defender and among many others. The company was formerly part of Jaguar but became a separate group in 1948. The Land Rover Range Rover Velar, Evoque, Autobiography and Discovery are regular models you will find in most celebrity’s car collections.

The Mini just like its name is widely known for production of tasty, small cars. Although it has been acquired alongside Rolls-Royce by BMW, a German company, it still has its roots in the UK. The brand has become popular among urban dwellers who are interested in something small with a performance engine. A typical example of such is the Mini Cooper S that was released in 2014. The company has continued to re-invent its design to compete favourably with the modern-day car company. Mini was established in 1909 by the British Motor Corporation. It has its headquarters in Longbridge, England.

One of the most used UK cars in the world is Bentley. Many believe that it is a brand for the rich and famous. Perhaps, they are right about that. Their first SUV, Bentley Bentayga has become one of the most sought-after SUVs by athletes, musicians and movie stars. Bentley was founded in 1919 by W.0 Bentley and M. Bentley. The company has been producing the limousine used by UK Royalties till date. In 2013, Bentley Mulsanne was selected as the best luxury car in the UK. Bentley used to be part of Rolls-Royce before it was purchased in 1997 by Volkswagen. The company headquarters is in Crewe, England. Popular Bentley models include Bentley Flying Spur, Bentley Continental S, Bentley Arnage, Bentley Mulsanne, Bentley Bentayga, Bentley 8 Litre, Bentley Turbo R and Bentley Hunaudieres.

McLaren gained more prominence recently when it was featured in the Fast and Furious franchise. The brand is known for the production of insanely fast cars. McLaren has been a known brand in Formula 1 racing. It was founded in 1989 by Ron Dennis. Its headquarters is in Surrey, England. Popular McLaren models include McLaren 720S, McLaren 650s, McLaren P1, McLaren 540c Coupe, McLaren P1 GTR, McLaren 570GT, McLaren 675LT and McLaren 625C.

The UK has offered us various car brands, ranging from salon to SUVs. This doesn’t mean the highlighted car brands are the only ones available. There are several other car companies that are already influencing the automotive economy of many countries outside the UK.