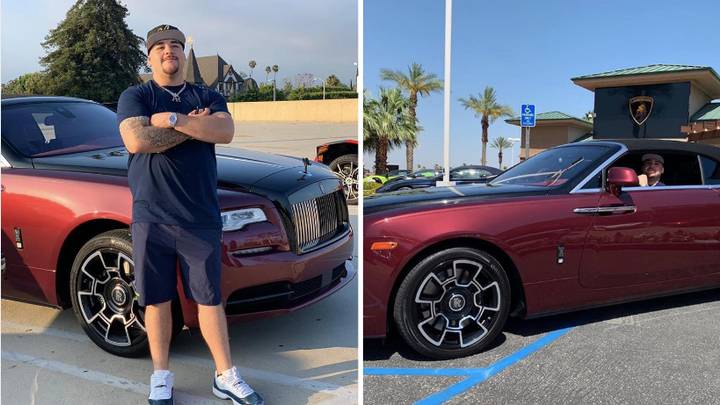 It was indeed a shock when the Mexican Andy Ruiz landed that heavy victorious blow on Anthony Joshua during their first heavyweight fight held in New York 6 months ago. It however took a different turn in the rematch held in Saudi Arabia. Andy Ruiz ‘The Destroyer’ struggled to move around with 20 stone frame during a fight that led to his defeat. This however has nothing to do with the amazing wheels in Andy Ruiz car collection.

Andy Ruiz reportedly attributed to his defeat to lack of preparation and consumption of lots of food. The Mexican champion while speaking with TMZ Sports, gave an inside explanation to what led to his defeat in Saudi Arabia. He said:

“I think I ate everything… EVERYTHING… that’s why I gained so much weight.

“But, I wish I had taken it more serious.”

Andy Ruiz however assured lovers of boxing that he will train better and properly if given a third shot at Anthony Joshua. Ruiz said:

“For the third fight, I’m going to give it all I got! I want those belts back!”

Andy Ruiz car: What ‘The Destroyer’ used his boxing earnings to acquire

In 2019, when Andy Ruiz defeated Anthony Joshua in his first ever loss, decided to flaunt 2 of his 4 belts atop a Rolls Royce alongside his wife. These champions’ belts were presented by the man himself to many people from his town in a borrowed Rolls Royce.

Andy Ruiz made a whopping ₦ 2.9 billion from the popular fight with Britain’s Anthony Joshua. When he was asked the first thing he bought with that huge money, he said:

“First of all I bought a car for my mum,”

“That was the first purchase that I made with the money that I got.

“I bought my mum a car because I messed up a lot of her cars when I was young. So I got her a brand new car.”

Andy Ruiz also made a payment of $1 million (₦386.5 million) for a new house while buying an expensive truck for his father. Just moment before his rematch with AJ, the Mexican champion made a shocking revelation of his newly acquired 4 luxury cars.

“My maddest purchase is probably all of the cars that I bought.

“I bought four cars, two types of Mercedes G-Wagons, the brand new Rolls Royce and a Lamborghini truck, an SUV.

“My spending has not taken my competitive edge off.”

Despite his father getting a truck from his son’s earnings, Andy Ruiz’s father wasn’t pleased with his ostentatious lifestyle, especially when he acquired the White Rolls Royce Wraith.

“Like a father, I told him to stay humble – don’t spend the money, invest it in houses,”

Looks like Andy Ruiz is disobedient after all as he went ahead to acquire a Mercedes G550 SUV worth around $100,000. When Andy Ruiz was captured pulling this luxury car on to his driveway, he said “Another One” while smiling at the camera.

According to report, Andy Ruiz also took delivery of his $325k Rolls Royce Cullinan SUV, a new addition to the exotic rides you will see in Andy Ruiz car collection. So, in the space of 6 months, Andy Ruiz acquired G-Wagon, Lamborghini and Rolls Royce for himself.