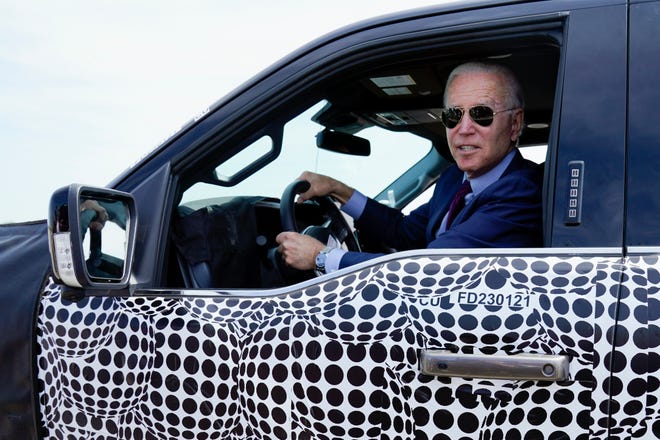 The Ford F-150 Lightning is one of the most anticipated models in 2021, from the American automaker. Of course, we were expecting it to make its first public appearance on the 19th of May, but it blew our minds when it made a shocking appearance at the time when the US President Biden visited the company’s Rouge plant in Dearborn.

Such impressive PR has paid off for Ford as the company has received over 20,000 reservations for this Lightning model. When the president was giving a speech at the carmaker’s plant, a silver Ford F-150 lightning prototype was spotted parked up in the background, without any form of disguise. It looked intentional, enough for everyone to see the beauty of this magnificent EV.

The front of the F-150 Lightning has seen some visible modifications such as unique headlights and an LED light bar covering the width of the fascia. The bumper at the front, windshield and wing mirrors looks largely the same as what you will find on the fuel-powered F-150 trucks. It also offers a blocked-off gloss black grille.

At the time of the presidential visit to the factory, the President took out time to test drive the disguised F-150 Lightning prototype. Of course, we are aware that Biden is a big fan of cars. He made quite an exciting remark when he said “this sucker is quick ” after speeding up in it. The president might have given a hint on what to expect in terms of acceleration. He noted that the truck got to 60 mph in 4.3 or 4.4 secs. We couldn’t help but hear a representative from the company informing the President that they haven’t released the specification details yet. It was at this time that President Biden took the EV truck to 80 mph.

The main reason the US president visited the Rouge Electric Vehicle Center in Dearborn was to promote his multi-billion dollar plan of investing into the development of electric vehicles.